I am so excited about today’s post. If you know me at all, you know I LOVE art! So when I walked into my daughter’s school and saw dozens of HUGE recreations of famous pieces of art painted by the students, I was so giddy.

I only took photos of a few of the pieces of art, but there were literally dozens and dozens lining the walls. They were huge too – like, floor to ceiling huge. I should have taken a picture with my daughter next to one. I think they projected the images onto the paper and then each group got to paint theirs.

Without further adieu, today is art appreciation day at House of Hepworths. Enjoy! 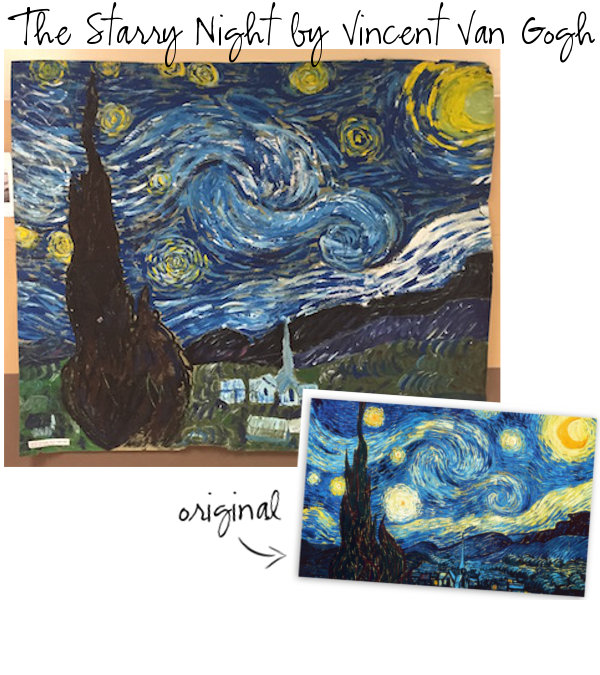 We’ll start with my favorite piece of art – The Starry Night by Vincent Van Gough. I have loved this painting since I was a kid. I remember once, when I was about 14, we took a vacation and ended up at an Observatory… McDonald Observatory maybe? Anyway, I bought a poster of The Starry Night and it hung in my room until I grew up and moved out.

“The Starry Night was created by Dutch painter Vincent van Gogh. Painted in June 1889, it depicts the view from the east-facing window of his asylum room at Saint-Rémy-de-Provence, just before sunrise, with the addition of an idealized village. It has been in the permanent collection of the Museum of Modern Art in New York City since 1941, acquired through the Lillie P. Bliss Bequest. It is regarded as among Van Gogh’s finest works, and is one of the most recognized paintings in the history of Western culture.

“In the aftermath of the December 23, 1888 breakdown that resulted in the self-mutilation of his left ear, Van Gogh voluntarily admitted himself to the asylum on May 8, 1889. During his time in the asylum, he produced some of the best-known works of his career, including the Irises, the blue self-portrait, and The Starry Night.” Source

Next up on our art appreciation tour… 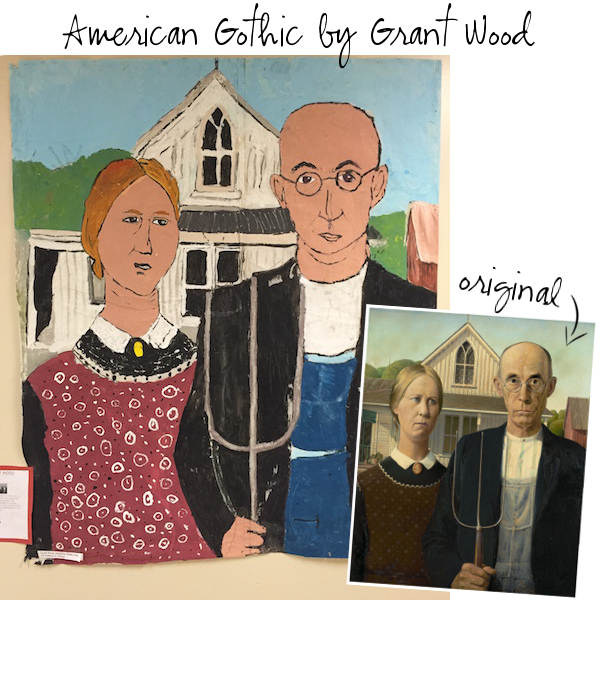 An American Classic, American Gothic by Grant Wood is one of the most recognized, copied, and widely parodied paintings in American pop culture.

“American Gothic is a painting by Grant Wood in the collection of the Art Institute of Chicago. Wood’s inspiration came from the American Gothic House, and his decision to paint the house along with “the kind of people I fancied should live in that house.” Created in 1930, it depicts a farmer standing beside a woman that has been interpreted to be either his wife or his daughter. The figures were modeled by Wood’s sister, Nan Wood Graham, and Wood and Graham’s dentist, Dr. Byron McKeeby. The woman is dressed in a colonial print apron evoking 19th-century Americana, and the man is holding a pitchfork. The plants on the porch of the house are mother-in-law’s tongue and beefsteak begonia, which are the same plants as in Wood’s 1929 portrait of his mother, Woman with Plants.

“In August 1930, Grant Wood drove around Eldon, Iowa and noticed a small white house built in the Carpenter Gothic architectural style. Wood “thought it a form of borrowed pretentiousness, a structural absurdity, to put a Gothic-style window in such a flimsy frame house.” At the time, Wood classified it as one of the “cardboardy frame houses on Iowa farms” and considered it “very paintable”. Source 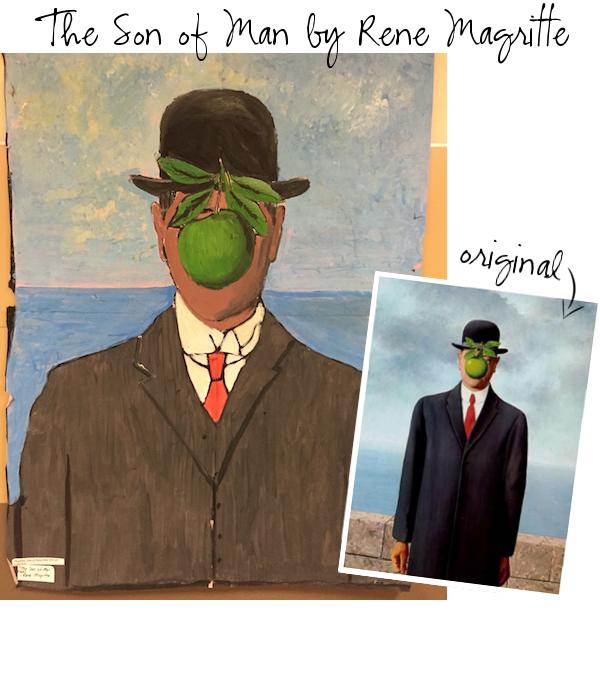 Here’s another piece you might recognize… The Son of Man by René Magritte is another classic.

“Mr. Magritte painted it as a self-portrait. About the painting, Magritte said: 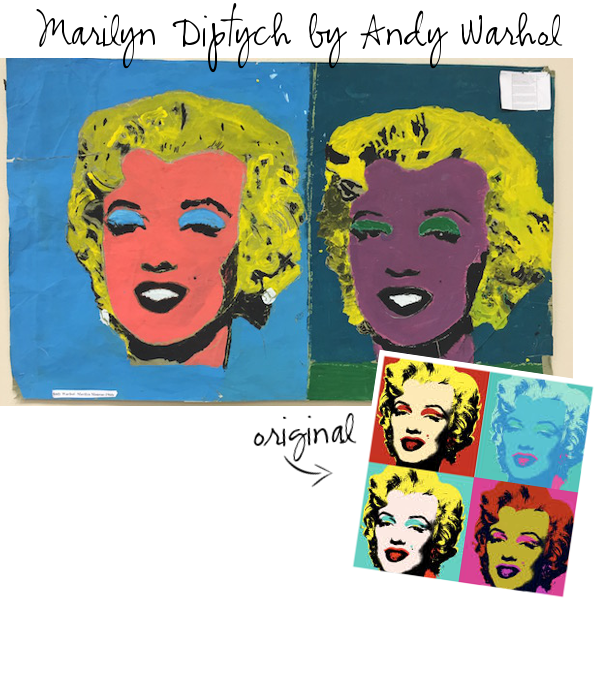 The Marilyn Diptych by American pop artist Andy Warhol is another favorite. I’ve loved Andy Warhol for as long as I can remember. I even made my own Warhol inspired art several years ago.

“The Marilyn Diptych was painted in 1962 and is a silkscreen painting. The piece is one of the artist’s most noted works, and it has been praised by several cultural critics.

“The work was completed during the weeks after Marilyn Monroe’s death in August 1962. It contains fifty images of the actress, which are all based on a single publicity photograph.

“In a December 2, 2004 article in The Guardian, the painting was named the third most influential piece of modern art. The piece is currently on display at the Tate Modern, as part of the exhibition: Witty, Sexy, Gimmicky: Pop 1957-67.” Source 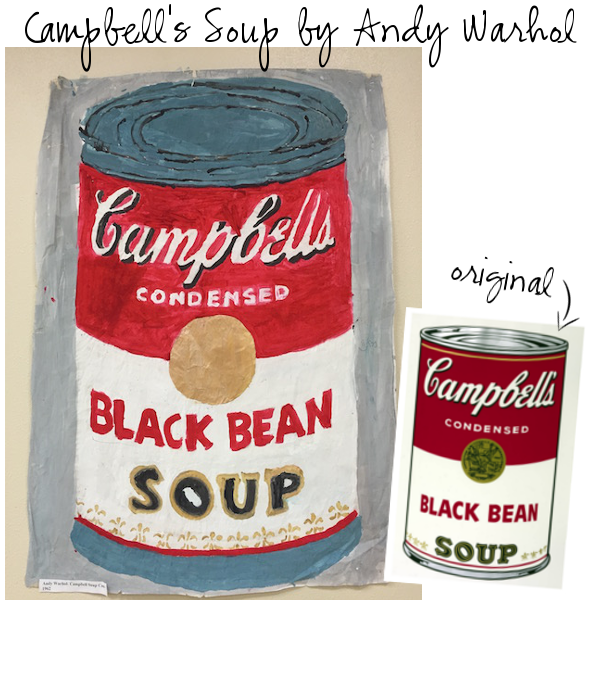 When you think of Andy Warhol, you probably immediately think of the Campbell’s Soup Cans.

“Because of the eventual popularity of the entire series of similarly themed works, Warhol’s reputation grew to the point where he was not only the most-renowned American pop art artist but also the highest-priced living American artist.” Source 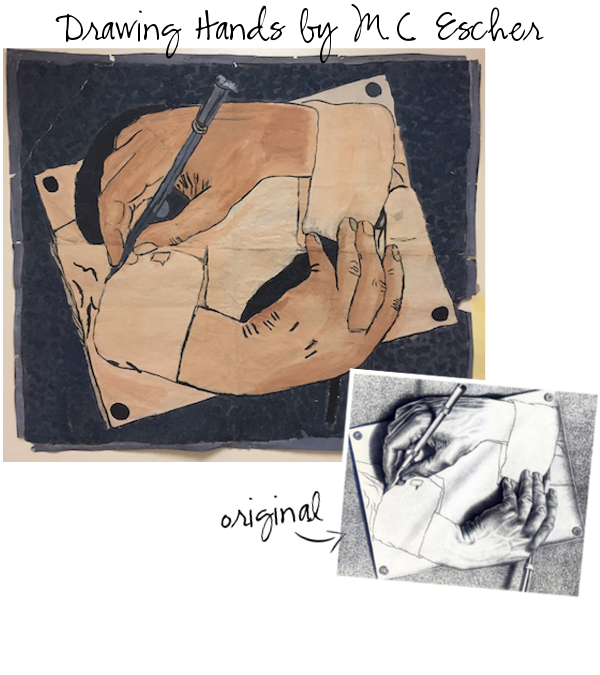 When I think of my teen years, I had exactly two artists who were my absolute favorite; Van Gogh and M.C. Escher. I was obsessed with M.C. Escher. I had a coffee table book of his work, a t-shirt, and also I would draw hands frequently. I felt so inspired by his mind-altering work.

“Drawing Hands is a lithograph by the Dutch artist M. C. Escher first printed in January 1948. It depicts a sheet of paper out of which, from wrists that remain flat on the page, two hands rise, facing each other and in the paradoxical act of drawing one another into existence. Although Escher used paradoxes in his works often, this is one of the most obvious examples. 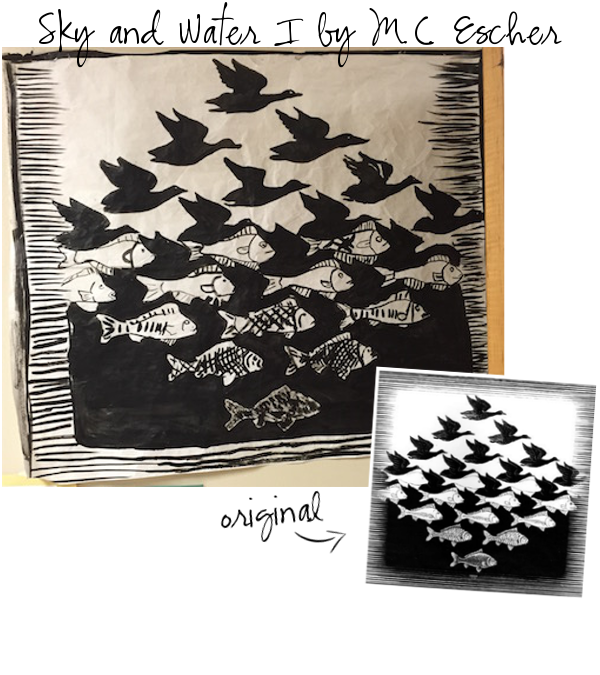 When I saw two different M.C. Escher pieces of art depicted on the walls of the middle school, I think I let out an audible squeal.

“Sky and Water I is a woodcut print first printed in June 1938. In this central layer of this piece, the elements are equal: birds and fish are alternately foreground or background, depending on whether the eye concentrates on light or dark elements.

“According to Escher: “In the horizontal center strip there are birds and fish equivalent to each other. We associate flying with sky, and so for each of the black birds the sky in which it is flying is formed by the four white fish which encircle it. Similarly swimming makes us think of water, and therefore the four black birds that surround a fish become the water in which it swims.”

“This print has been used in physics, geology, chemistry, and in psychology for the study of visual perception.” Source 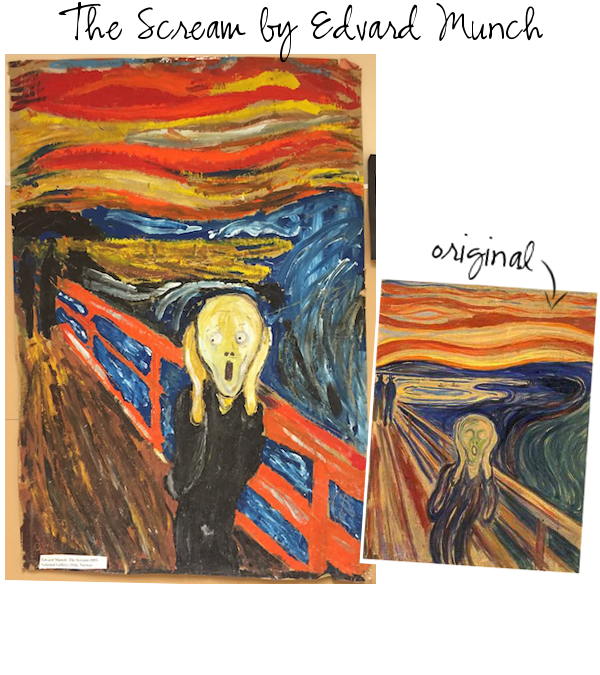 If you’ve been in any type of chachki art store, you’ve probably seen some variation of The Scream by Edvard Munch.

The Scream is by Norwegian Expressionist artist Edvard Munch. The work shows a figure with an agonized expression against a landscape with a tumultuous orange sky. It has been described as “an icon of modern art, a Mona Lisa for our time.”

“There are four versions of The Scream; two painted and pastel versions. One of the four was sold for $119,922,600 at Sotheby’s Impressionist and Modern Art auction on May 2, 2012 to financier Leon Black, the fourth highest nominal price paid for a painting at auction.

“The Scream has been the target of several high-profile art thefts. In 1994, the version in the National Gallery was stolen. It was recovered several months later. In 2004, both The Scream and Madonna were stolen from the Munch Museum, and both were recovered two years later.” Source 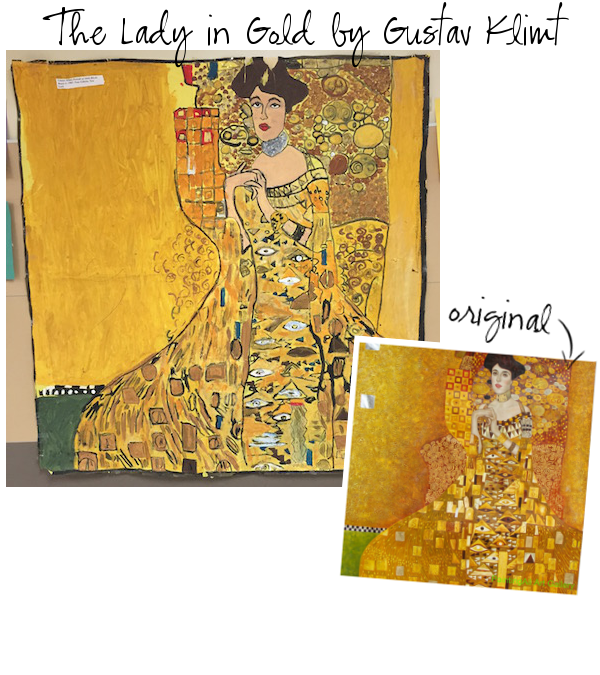 You might recognize Gustav Klimt by his even more popular piece, The Kiss, although The Lady in Gold is also quite famous.

“Portrait of Adele Bloch-Bauer I (also called The Lady in Gold or The Woman in Gold) is a painting by Gustav Klimt, completed between 1903 and 1907. The portrait was commissioned by the sitter’s husband, Ferdinand Bloch-Bauer (de), a Jewish banker and sugar producer. The painting was stolen by the Nazis in 1941 and displayed at the Österreichische Galerie Belvedere. In 2006, following eight years of effort by the Bloch-Bauer heirs, the painting was returned to the family; it was sold the same year for $135 million, at the time a record price for a painting.

“In 1998 Hubertus Czernin, the Austrian investigative journalist, established that the Galerie Belvedere contained several works stolen from Jewish owners in the war, and that the gallery had refused to return the art to their original owners, or to acknowledge a theft had taken place. One of Ferdinand’s nieces, Maria Altmann, hired the lawyer E. Randol Schoenberg to make a claim against the gallery for the return of five works by Klimt. After a seven year legal claim, which included a hearing in front of the Supreme Court of the United States, an arbitration committee in Vienna agreed that the painting, and others, had been stolen from the family and that it should be returned to Altmann. It was sold to the businessman and art collector Ronald Lauder, who placed the work in the Neue Galerie, the New York-based gallery he co-founded.” Source 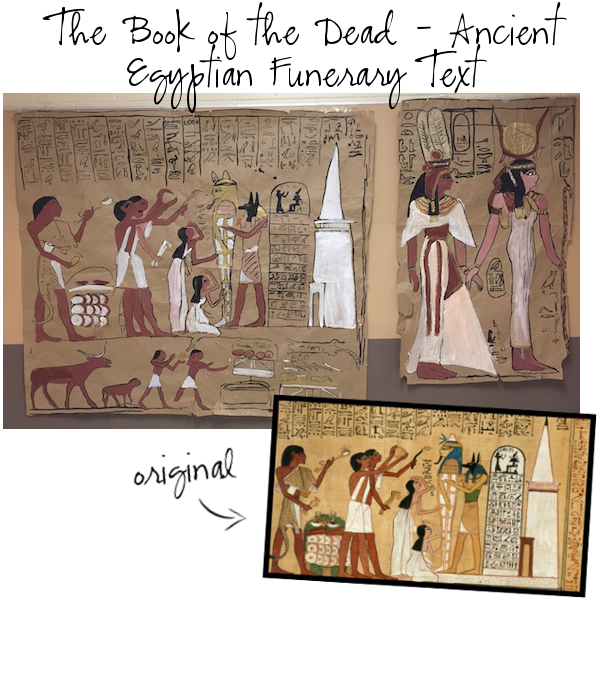 Last on our artwork tour, The Book of the Dead is an ancient Egyptian funerary text, based on the Papyrus of Ani. It was created c. 1250 BCE, in the 19th dynasty of the New Kingdom of ancient Egypt.

“The original Egyptian name for the text is translated as Book of Coming Forth by Day. The book consists of a number of magic spells intended to assist a dead person’s journey through the underworld and into the afterlife. It was written by many priests over a period of about 1000 years. The Book of the Dead was most commonly written in hieroglyphics on a papyrus scroll, and often illustrated with vignettes depicting the deceased and their journey into the afterlife.” Source

I hope you enjoyed your Art Appreciation Tour today! I wish I could have taken one of these huge paintings done by these kids home with me. They were so so so cool! Do you have any specific favorite pieces of art? What piece, and why?

If you’d like your own copy of one of these amazing pieces of art, here are links to order each of the above prints:

Thanks for reading! Have a wonderful weekend!