Do you remember waaaay back when I showed you this picture? 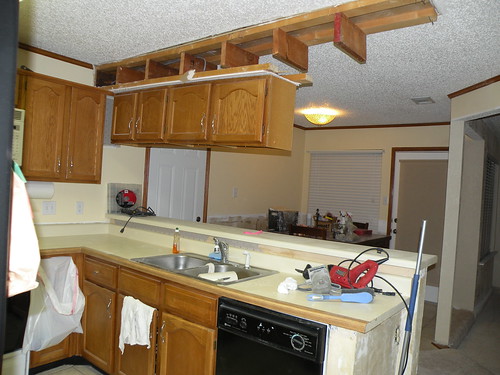 It’s from a post I made about three and a half weeks ago (hey, that is a reeeeally long time in blog time!) called

Well, as previously promised I’m ready to show you the money. Here’s the start to finish of this messy project.

When we bought the house it looked like this: 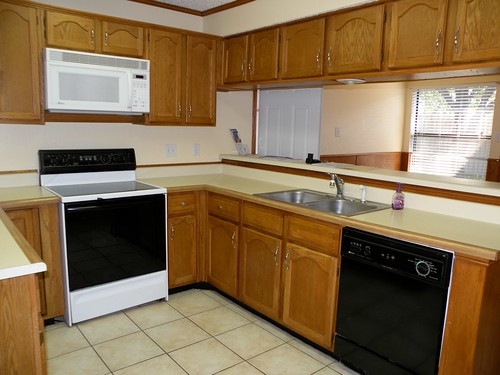 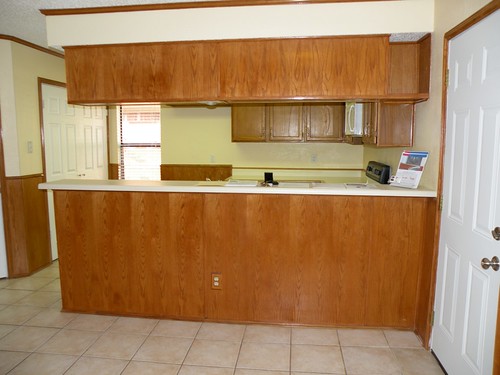 Gross right? This house is SO 80’s. And I’m so over the 80’s. Besides ripping out all that horrible paneling and the brown crown molding (don’t flame! I really do like crown molding!!), I just totally could not stand having cabinets hanging down from above the sink.

It blocked my view of the breakfast area and the family room and it made me feel totally isolated from the rest of the family.

One day I’d had enough of those cabinets and that wall! I did not like the 2′ wall (that looks about 2 feet, right? Maybe it’s only a foot. Who knows. And who cares?!) hanging down from the ceiling either. So I did what any rational housewife would do while her unsuspecting husband was away on a business trip… 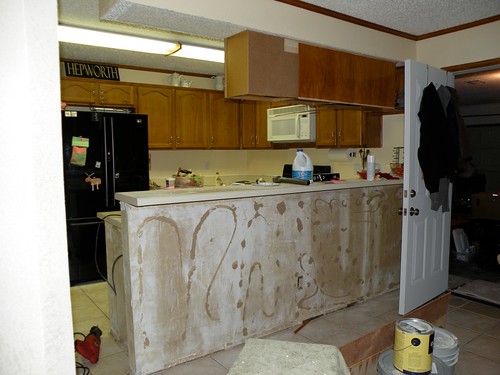 I decided to just take it down myself. I jumped up on the counter top and began unscrewing the cabinets. I did just fine on the first one, but then on the 2nd and 3rd cabinets the screws were totally stripped out. 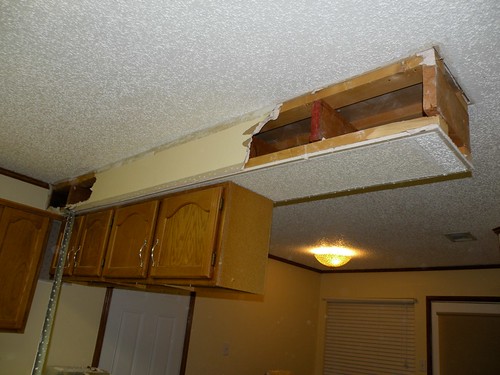 I figured the wall was coming out also so why not just bring it all down at once? I got out my hammer and began whacking. 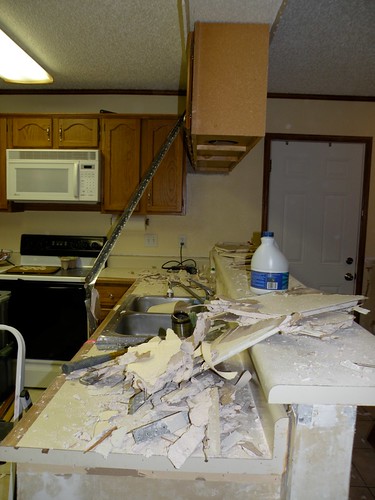 (Do you like my cookies baking in the background? I’m sure that batch didn’t have any asbestos in them. Yikes!)

Holy mess! Who would have thought I’d get this much mess from ripping out some drywall?

Once I got all the drywall off I got out my trusty crowbar and began to pry those 2x4s apart. 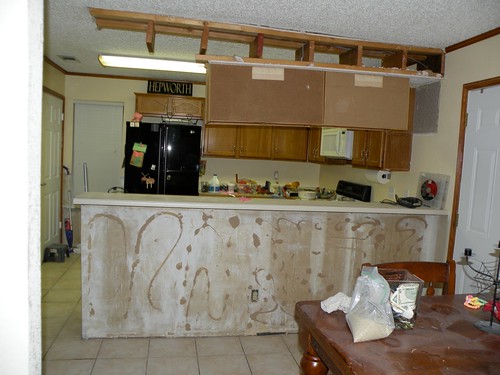 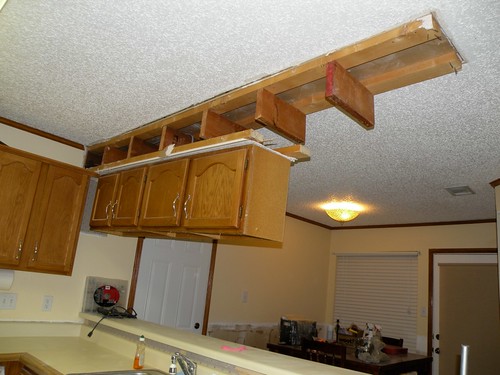 Um, okay. Now what? This is when it began to get tricky. Do you realize how much two cabinets and about 5 2x4s worth of wood weighs? I was by myself working on this project and it was super heavy.

I didn’t take any pics of it (should have – dang it!) but basically I stacked up several bins and boards until it touched the bottom of the cabinets. That way when the cabinets came down (with my crowbar) the entire unit landed on my makeshift pile instead of me. 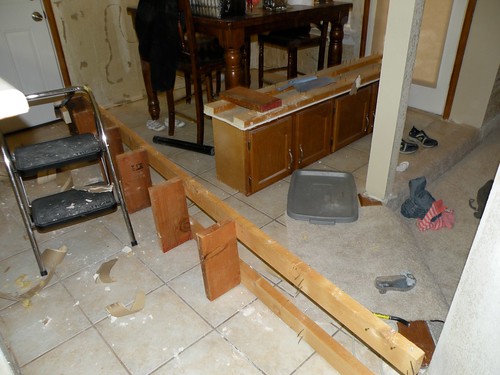 Notice the cabinets are still screwed to the underside of the ceiling? I had to later actually cut the screws off of the cabinets. They did not want to come out!

Unfortunately and unbeknown to me this wall built out of the ceiling was built all as one piece and then inserted after the fact. The drywall was actually attached from the top down into the hanging wall (is this making any sense at all?).

Basically, when I took out the wall section hanging from the ceiling, all the drywall came with it spilling insulation everywhere! 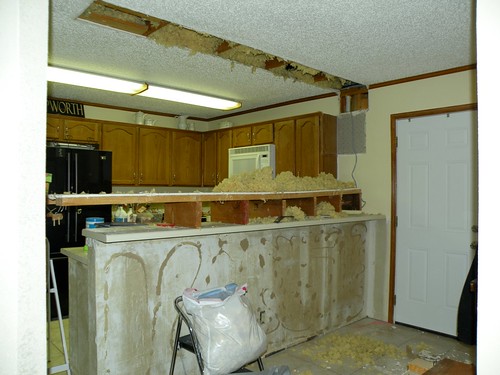 I did not see that coming. Yikes.

I very carefully scooped up all the insulation and put it in a garbage sack. Once the project was completed I dumped it back in my attic.

I took the section of drywall that was attached to the 2x4s and screwed it up into the studs in the ceiling. It wasn’t the best piece of drywall so I had to patch it a bunch. 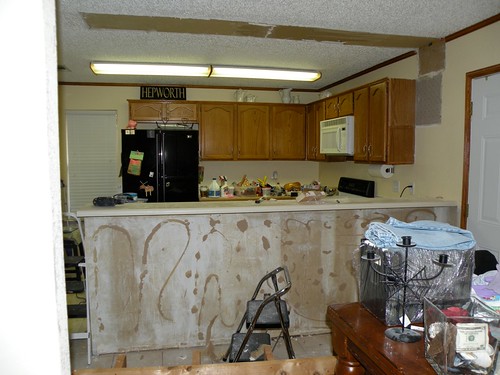 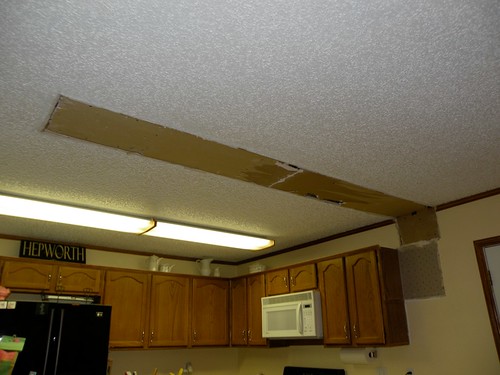 After I patched up the entire area with spackling it was time to texture it. In a move that I would later regret – A LOT – we filled our texture machine with popcorn ceiling stuff so we could match the rest of the ceiling.

This was about the time hubby came home from aforementioned business trip – just in time to spray popcorn. Yes! (He still hasn’t forgiven me for that. Oops.) 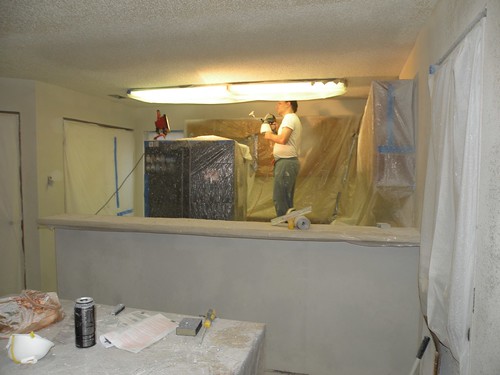 (He is absoultely going to kill me when he sees that I posted this picture of him.)

Spraying popcorn has got to be the worst, nastiest, grossest, messy job he’s ever done. Disgusting does not even begin to describe how gross you and the entire room get after spraying popcorn. I DO NOT recommend it to anyone unless you absolutely have to.

Then we just painted the ceiling (and the rest of the kitchen). 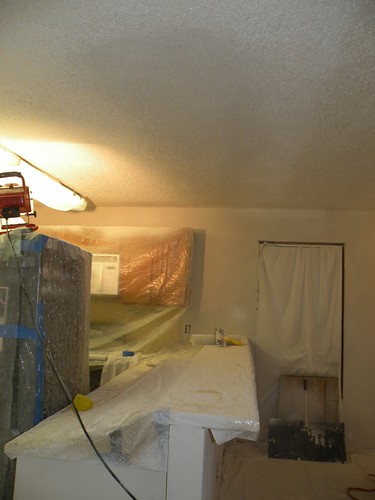 Here’s why he regrets spraying the popcorn ceiling (besides it being totally nasty stuff). After we finished the kitchen I started on the bedroom makeovers. I quickly learned how EASY it is to scrape popcorn OFF your ceiling and promptly began scraping every ceiling in our entire house. SO basically I wasted my time spraying the kitchen ceiling because in the end we are going to scrape it, and also scraping a painted popcorn ceiling is so much harder than scraping a non-painted popcorn ceiling. Now we really have our work cut out for us. 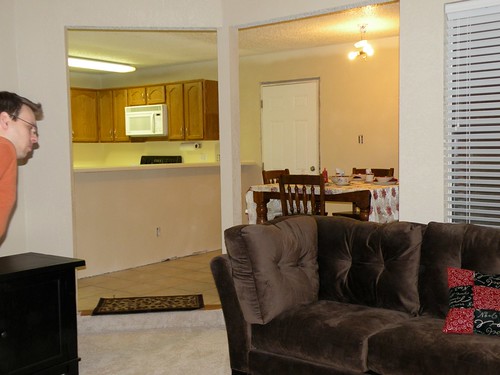 At the end of the day I think this project turned out totally rockin’ fabulous. You can’t even tell there use to be a wall there. I think I did an excellent job on the patch job. 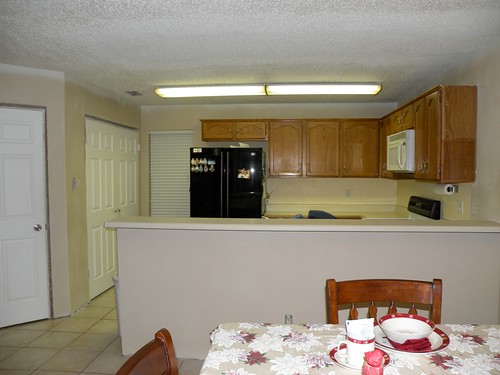 The ceiling looks a tad different color in the picture, but IRL it is the same color. I think it’s a weird shadow.

Also, did you notice we textured and painted all the walls as well?

Since this picture was taken I’ve hung all the baseboards and molding and painted it all bright white. Unfortunately I don’t seem to have any pictures of my work and I can’t take any now b/c I’m currently not living in this house.

The main reason I love this so much is because it feels so much more open. I don’t feel like I’m stuck in the kitchen while my family and friends are off in the breakfast area socializing. It makes it feel more like one big open space. Plus now the lighting in the kitchen (horribly ugly, I know) spreads throughout the entire kitchen and breakfast area and into the living room.

What do you think? Do you like it better