Yesterday (Monday) morning we awoke to this: 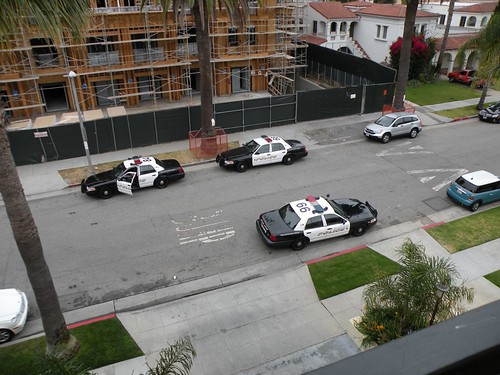 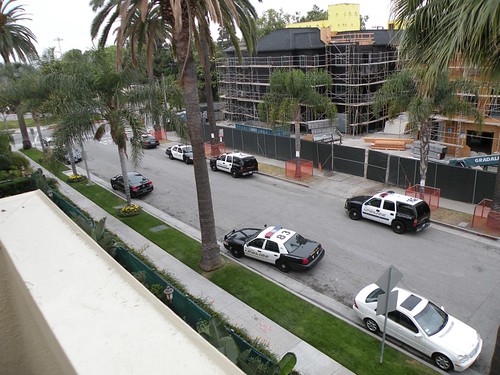 Beverly Hills Police Department. And it wasn’t just one or two cops. Their entire night crew was at our complex.

There were at least 7, maybe more cop cars swarming our complex.

Uh-oh is right! What on earth is going on?!

Let me preface by explaining that our “apartment complex” isn’t the kind you’d usually think of.

We have a parking garage underground, and then 4 floors of apartments accessible from the inside by an elevator.

It kinda feels like I live in a hotel (trust me, it’s only fun and cool for about half a second, and then it gets old real.fast.).

We only have about 40 units total here and the complex and parking garage are completely gated.

We must be safe, right? 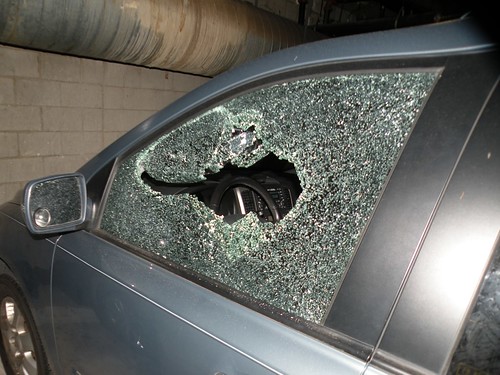 And here’s the other side of my car. 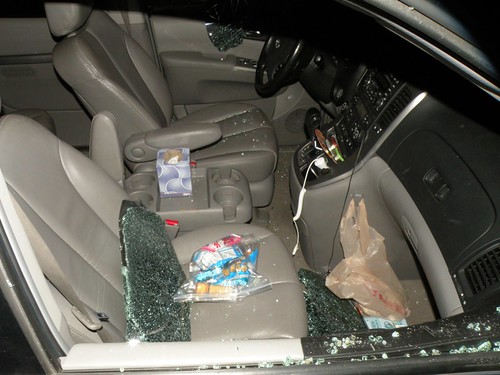 Both my drivers side and passenger side windows were smashed out by some thugs at some point during the night. 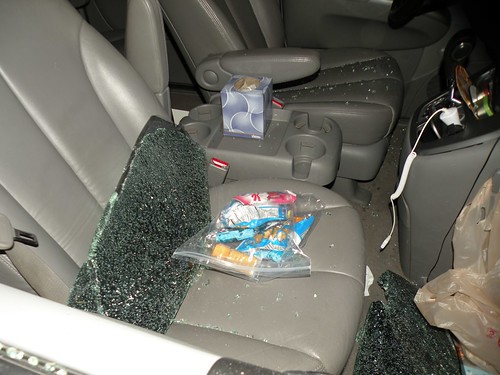 They wanted my GPS. 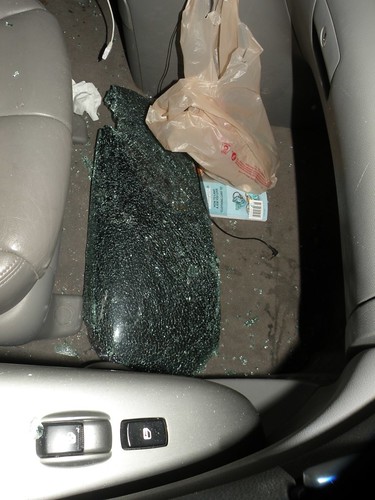 Let me repeat that. Some a-hole smashed in BOTH my windows to steal my GPS.

First off, you’d have to be a total moron to smash windows and steal stuff in the first place. But, to break two windows? This idiot must be beyond moron. I kinda feel bad for the guy because he’s obviously SO STUPID that he’d break two windows. 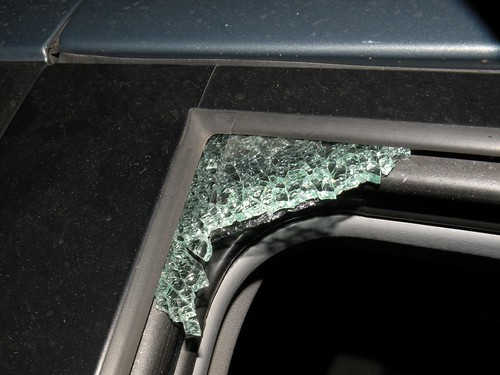 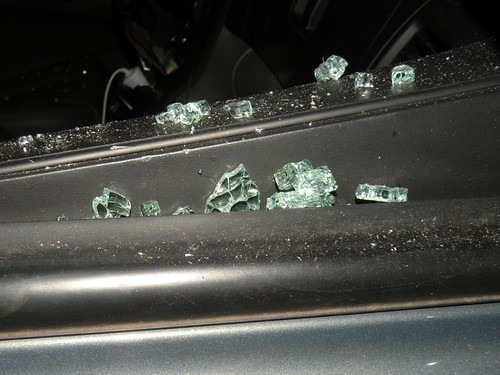 I’m still cleaning glass out of my car.

As it turns out, my car wasn’t the only victim yesterday morning. 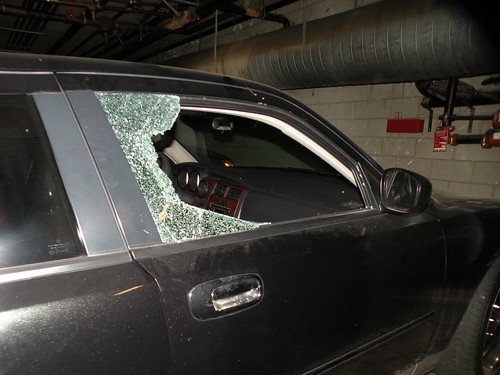 (This is a different car in the garage)

Several cars had their windows bashed in. Lots of GPSs were stolen as well as cell phones, iPods, Golf Clubs, bags of clothes (?), and who knows what else.

I’m just the only one lucky enough to have BOTH my windows smashed out. Everyone else only got to deal with one window, but I guess I’m extra special like that. 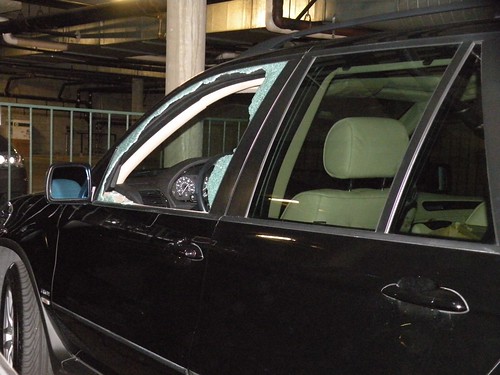 (This is yet another car in the garage)

As it turns out, 18 (yes, I just said EIGHTEEN!) cars were vandalized and burglarized Sunday night/Monday morning.

(Hence the entire Beverly Hills Police Department showing up at our complex.) 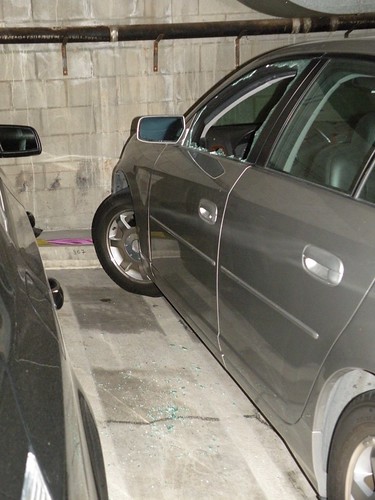 Apparently Beverly Hills doesn’t usually have crimes of this magnitude. I guess us crime victims are just lucky like that.

I’m sure I’ll never see my GPS again, but there were several security cameras that got the entire thing on their feeds, so at least the cops now have something to go off of.

Even the Crime Lab came out to play! 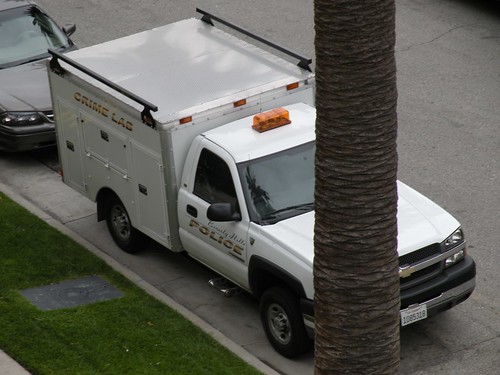 Our car was held hostage as part of the “crime scene” until after the Crime Lab could finish getting prints off all the cars. 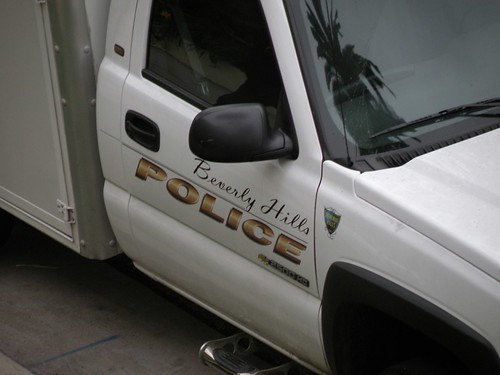 It was pretty cool watching this lady pick up prints. I’ve never seen anyone collect fingerprints at a real crime scene before. 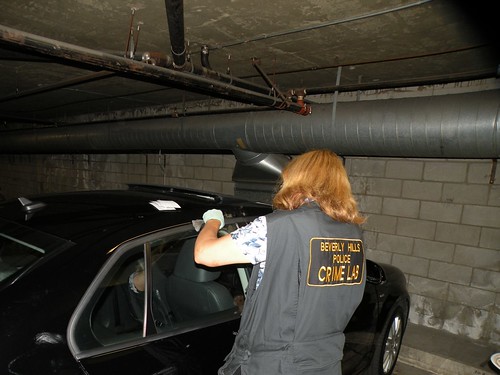 So whatta ya gonna do? (Channeling my inner Tony Soprano here)

We managed to get our car down the road about a mile where there’s an Auto Glass instillation place. They luckily had the glass for our minivan in stock and were able to get us new windows the same day.

It just totally sucks though because that GPS was probably only worth like fifty bucks because it’s over 3 years old, yet TWO new windows cost us $601. Six hundred bucks worth of damage for a lousy old GPS.

Folks, listen up. I’m living proof that people actually do steal GPS units from cars. Please learn from my mistake! Lock up and hide your stuff!

If I would have put the unit away, my car would have been skipped over. Instead, it cost me a day of hassle, a stolen unit, AND six hundred dollars.

It would have been so much easier if I had just taken a few seconds to put it in the glove box.

And now I’m nervous about going into the garage! Especially at night! What if those thugs had a weapon? What if someone had gone to their car in the middle of the night? Someone could have been killed! The thought of that just totally freaks me out!

I’ve made it 6 months here, and just 4 days before I’m suppose to move away, my car gets broken into and my stuff gets stolen.

I’ve traveled across the US. I’ve lived in Jersey, all over Texas, and in California. I’ve driven into NYC and parked my car at Central Park. I’ve stayed in hundreds of hotels. And out of all the places I’ve been, I’ve never had my car broken into…. until I moved to Beverly Hills. Kinda ironic, dontcha think?

Whatta ya gonna do?

What’s that saying plastered all over parking lots across the Nation?

LOCK your car. TAKE your valuables. HIDE your stuff.