Have I mentioned that I may be just a tad bit OCD?

No, I will not guarantee that this will be my last Rodney White post.

“Nothing To Dream” is my favorite of all his art. LOVE IT.

I was on a mission to acquire this piece of art and nothing was going to stop me until I succeeded.

Sure, I could have dropped $129 at World Market… 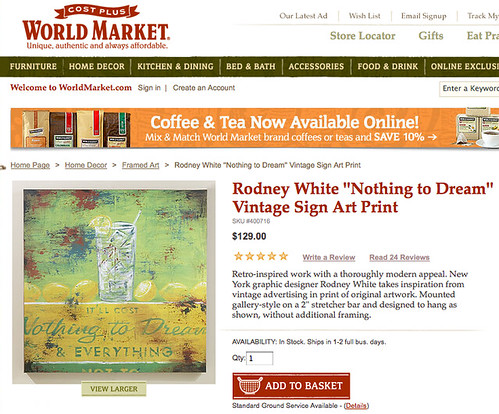 But I just can’t justify that kind of moola for artwork when I’ve got other things that our family actually needs.

I tried to convince my husband that a Rodney White print was a NEED and not a WANT, but he just rolled his eyes.

For at least 2 months I’ve been scouring Craigslist every.single.day. looking for his artwork. (That’s how I scored my last two pieces.) I have searched every city within a 300 mile radius just hoping to stumble upon this Lemonade art.

Wednesday I struck GOLD. I did a search for “Rodney White Craigslist” and a 36″ x 36″ Nothing To Dream canvas print popped up in Google. (That’s a yard by a yard big, y’all! – HUGE). And it was only TWENTY FIVE DOLLARS!!! Only there was one teensy tiny little catch…

It was in Los Angeles. Culver City to be exact (near Santa Monica).

“Hyperventilating” isn’t a strong enough word to describe how I reacted. I actually was so giddy and immature that I forced my mom to hang up her phone (I was at her house) so that I could call the lady. I called the lady and said I’d be over by 9pm that very night.

I’m sure you all are wondering how I was planning to pull this off considering I LIVE IN TEXAS, NOT California….

Well, as luck would have it, my husband just so happened to be in Santa Monica that very day for business. (I know, so lucky, right?!!). I called him. It went like this…

“Hi! I have a REALLY HUGE favor to ask you. It’s going to be a HUGE inconvenience on you and you will probably hate me by the time you are done. You will probably only even agree to this favor because you REALLY REALLY love me. A lot.”

At which point I blurted out, “OMG I’m dying, Ben. DY-ING. I found THE.PICTURE. (He knew exactly what I was talking about.) Only problem is… it’s in LA, but it’s right by you!! Will you go get it for me and bring it back home with you when you fly home Thursday?”

He is the best husband in the entire world, so he obliged. And then after he agreed and couldn’t back out I just slipped in that it was “only” about a yard squared…

So he goes and picks it up. And it would barely fit in his car. He almost had to strap it on top of his rental car. Yes, it is THAT.BIG.

And then he has to go to the FexEx store and spent an additional $35 on packing materials ($60 total for the picture and the packing supplies).

And the package was so big that when he got to the airport they tried to make him pay $150 to check the package because it was “over sized” (over sized is an understatement. This box was ridiculously large…).

Well, I know he must truly love me because he actually got into an argument with the lady at the bag check about having to pay the $150. They just would not budge. So he threw out that he travels every week with American Airlines, and he NEVER checks a bag. Nope, they still wouldn’t budge. He mentions that he already has over 50,000 miles with American this year alone and would they please waive the fee just this one time. Nope. And then he pulls out all the stops. He pulls out his phone and asks for the CEO’s phone number. He tells the lady that he’s going to call the CEO and personally let him know that American Airlines has just lost a weekly business client that has already clocked in over 50k in airline miles this year over a checked package. He asks the lady if she thinks the CEO will be happy that she personally caused a weekly client to change airlines over one little checked bag. (Niiice… I love my hubbs!). And then as a crowd is gathering around listening and seeing how AA is not being very customer friendly, he throws in that he’s about to miss his flight because of her.

Then she obliged and let him check the package for free.

And that my friends is how I finally acquired my Nothing To Dream Rodney White canvas print.

And when I hang it, you’ll be the first to know – pictures included.

« Give your windows special treatment
Life is Good; 600 Google Friends »