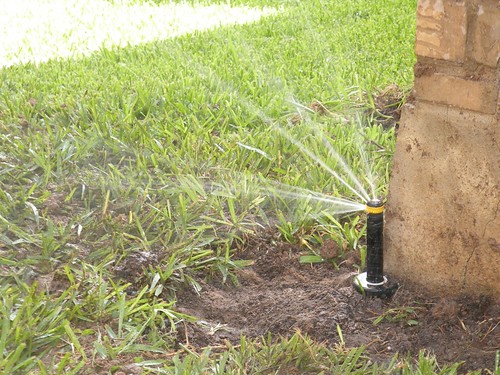 Just because I am capable of fixing something does not mean I want to fix it!

But sometimes we have to do things we don’t really want to do.

We’ve been in our house for 4 weeks (can you believe it’s been 4 weeks already?!)!

When we moved in 4 weeks ago our backyard looked this green.

Well, after 4 weeks of watering 3x a week with our sprinkler system, the grass kept getting yellower and deader in a few areas.

I put it off for a few weeks, but finally decided I better go out and deal with the sprinkler system. Something was obviously wrong with it.

What I found were TWO broken sprinkler heads – and two HUGE sloppy puddles where those heads are located.

I shut the sprinkler system off, let the area dry out for 2 days, and then dug two holes to survey the situation. (All the while reminding myself that several gallons of paint for my Living Room will be worth this torture.) 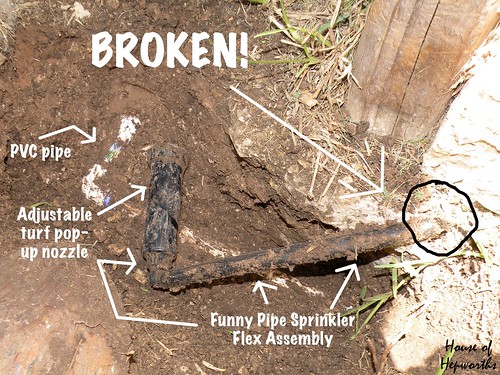 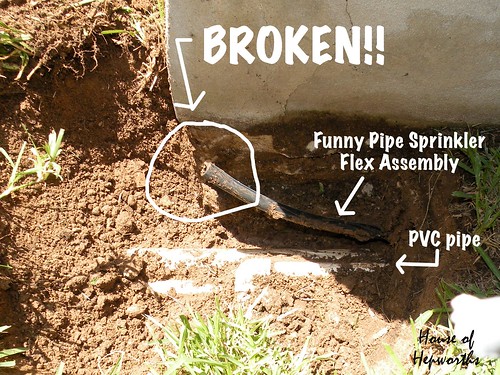 Ok, so let me be honest here. Before I went to our local hardware store today I didn’t even know what those black tube-y arm things were even called.

I honest to God had NO CLUE what I was doing today. I’ve never done sprinkler systems. NEVER. I literally just learned as I went along – so you can too! (Trust yourself!).

I figured out that the tube that connects the PVC water line pipe to the actual sprinkler head was broken on both. 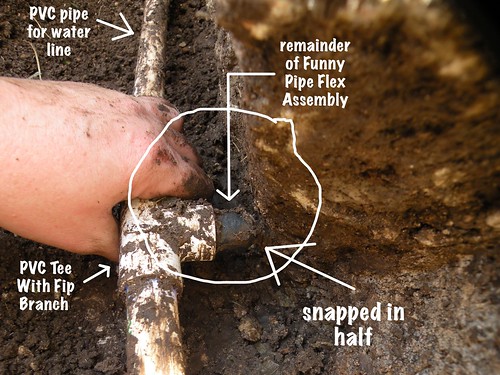 In order to fix the leak, I was going to have to replace the Funny Pipe Flex Assembly arms, but they were attached to the PVC Tee, which meant it had to come out as well.

I made my grocery list and headed to our local hardware store. 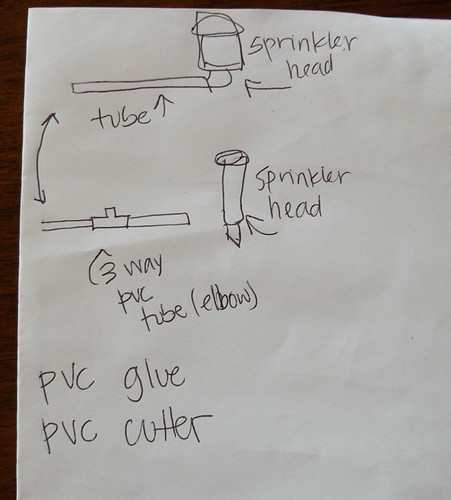 (Believe it or not, this actually makes total sense to me. Haha!)

I also took my camera so I could look back at the pictures I snapped while I was at the house in case I needed a visual while figuring out what parts I needed to buy.

As I show you how I replaced the old heads with new ones, I’ll give you a run-down on what items I purchased in case you need to do this same project at home (hopefully not!). 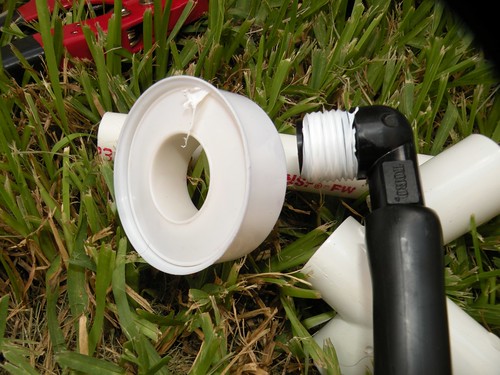 The Thread Seal Tape is ALWAYS needed when you are doing any type of plumbing work. It forms a water-tight seal. The tape isn’t sticky at all but just wrap it around a few times tightly like you would with regular tape. 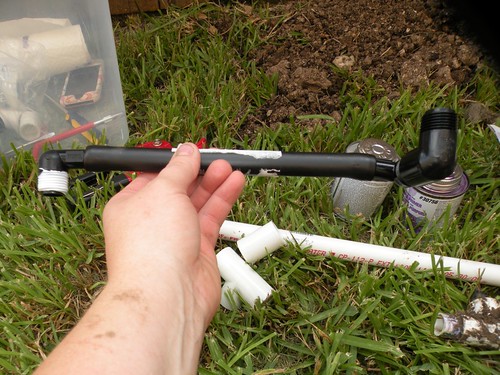 Next, you need a PVC Tee with Fip Branch (No clue what that means). This T shaped PVC pipe will attach the water line to the Funny Pipe Flex Assembly. Make sure you buy a Tee that is smooth through the main part and female-threaded at the top.

Once the tape is in place, simply screw on the Tee. 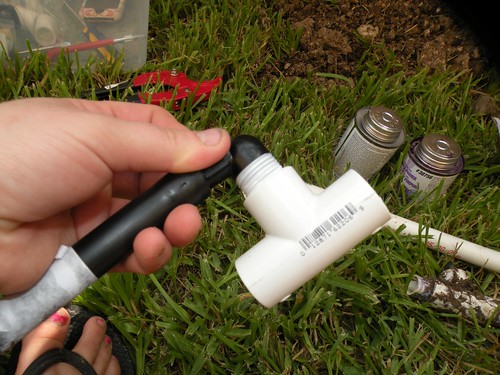 Now take the other end of the Funny Pipe apart, add the Thread Seal Tape, and then put it back together. This is the end the sprinkler head will attach to. 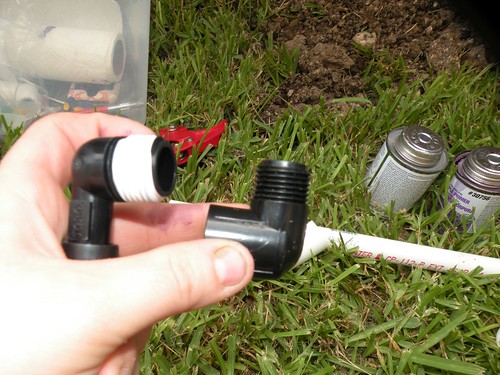 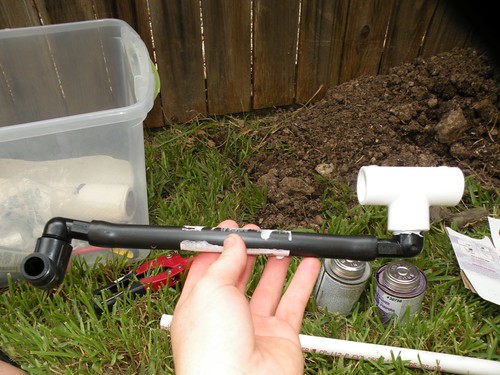 Now you are ready to start gluing PVC pipe!

I can’t just cut out the old pipe from the ground and add the same exact piece. Because I cut the pipe out they are now too short, so I have to extend the pipe using additional pipe and a coupling. I’ll explain this more as I go along.

For starters we need to glue the Tee piece to the extra piece of PVC I purchased. Here’s how to glue PVC pipe together.

I bought this package: 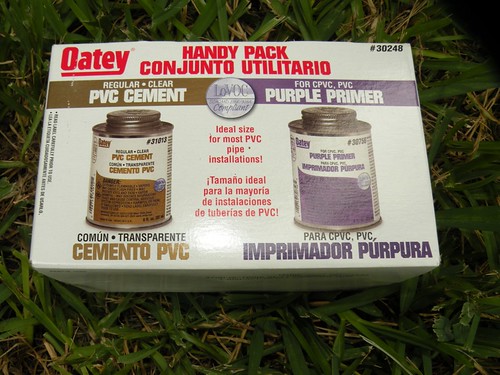 I don’t know WHY you have to prime the pipes with purple primer. All I know is that you have to, so do it.

Using the brush attached inside the lid (like rubber cement), paint around any part of PVC that will be glued together. 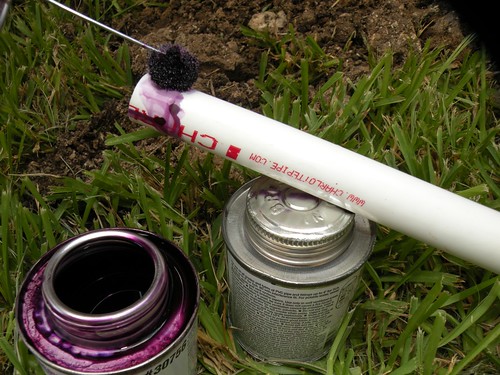 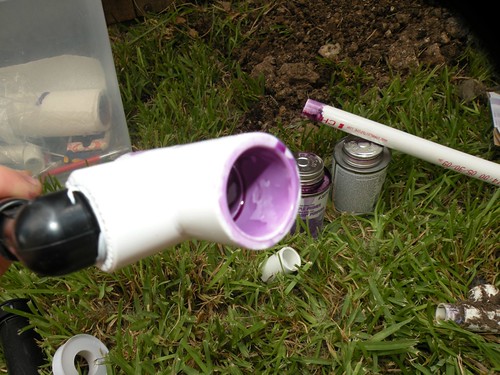 When the primer is dry (in about 10 seconds) take the cement and paint around the same part. 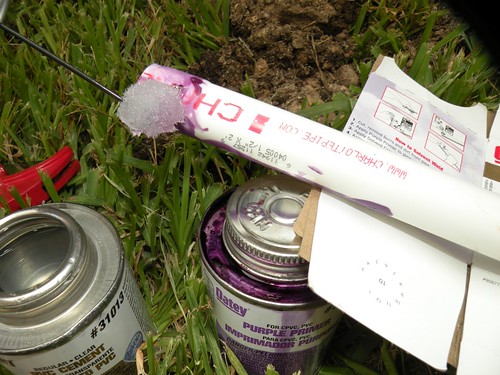 Quickly insert both pieces together, then twist 1/4 a turn. Let dry for about 30 seconds or so. 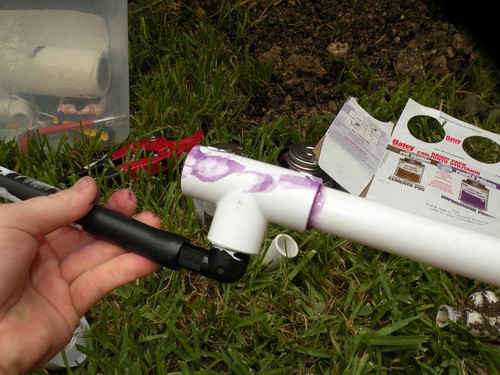 Take your piece, cut the long pipe the length you need, and then glue the coupling. 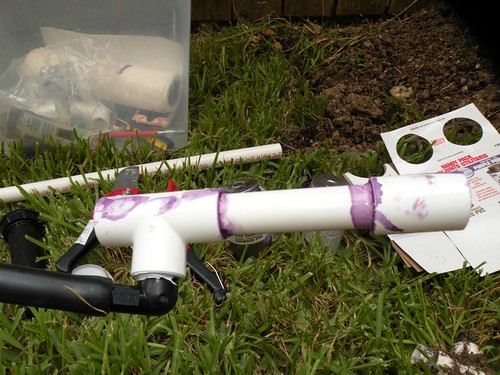 Now it’s time to attach your new pipe segment to the existing pipe in the ground!

You’ll need to use a PVC cutting tool and cut the old segment out before you can glue the new one in. 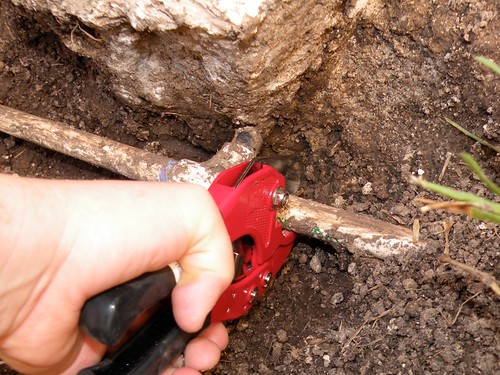 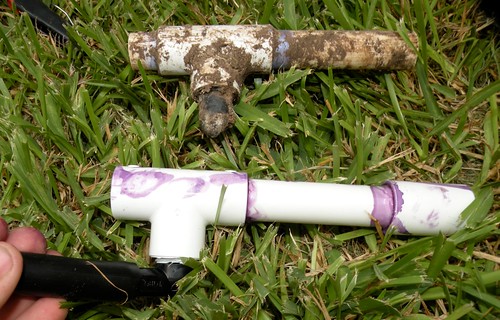 Clean your pipe in the ground (I used a Lysol wipe and a paper towel), prime it with the purple primer, then add the glue. 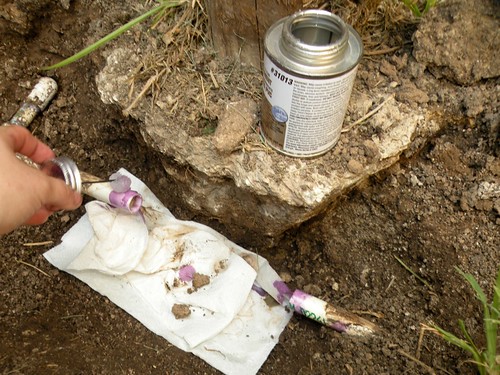 Insert your new pipe and let it all dry for a few minutes. 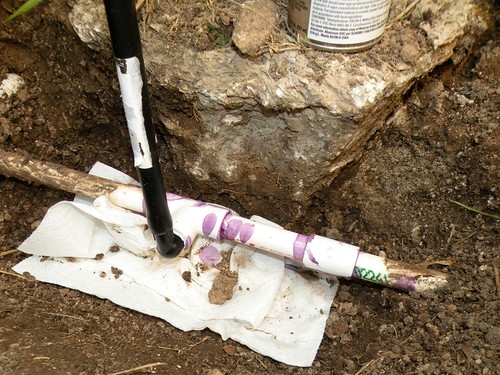 We are almost done, I swear! (Try doing this when it’s 100 degrees outside!) 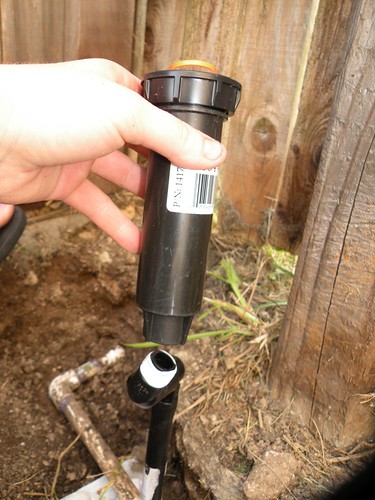 Once it’s screwed on you’ll need to pull up on the orange tab. That will raise the water arm. Remove the orange top, but be careful not to let the tube pop back into the sprinkler head. Hold it tightly! 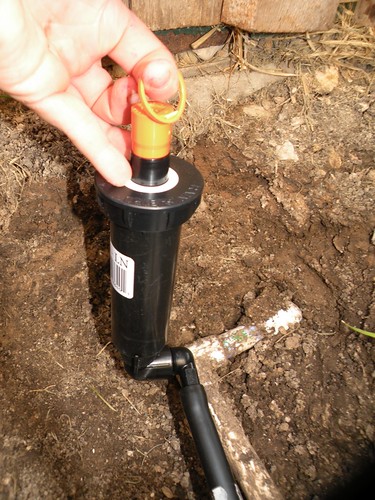 Attach your new nozzle (this is purchased separately, so don’t forget it!). 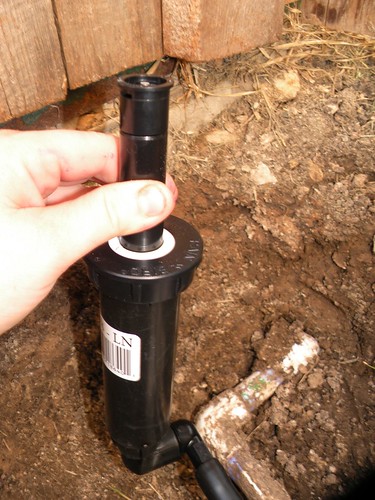 And now you are DONE with the installation of a brand new sprinkler head and Funny Pipe Flex Assembly. 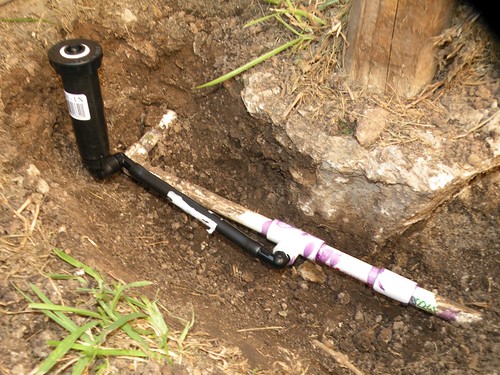 Stand back and admire your work. Pray it doesn’t leak.

Time to test it out before I bury it again. (It seems like such a shame to bury such amazing work.)

By golly, it works! And on the very first try no less!! 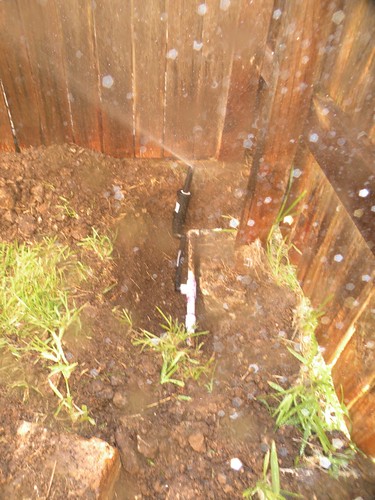 Finally, bury that sucker back in the ground. Turn on the water one more time for a final photo-op and to admire your handy work! 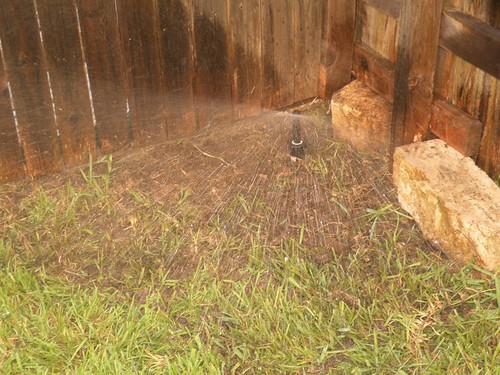 I learned all.of.this. TODAY. It’s amazing what a few hundred dollars will do to motivate someone! 😉

Oh, also, I spent about $40 total on all the parts and tools I needed for this project!

And because I said I had to replace TWO sprinkler heads today, here is the completed 2nd one. Beautiful, isn’t it?! 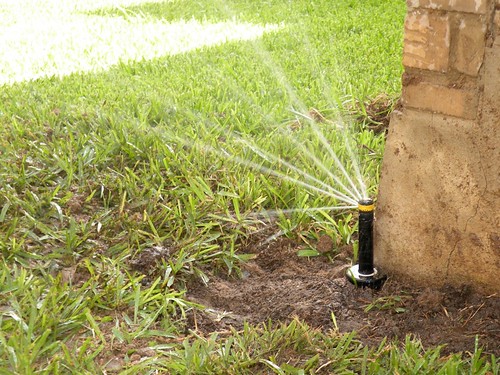 I’ll never look at another sprinkler head the same way ever again!

Oh, and in case you are wondering why I’m out here doing this and not my wonderful hubbs…

He works. A.LOT. Plus, I’m the handy one in this family. He can do computer “stuff” like no other, and he’s great at lots of things, but when it comes to home repairs, that’s my job. My dad taught his daughters how to do all sorts of Do-It-Yourself stuff. I hated it at the time, but now I’m eternally grateful! I can replace a toilet, build a shed, install a new car engine, change a flat, tile, install doors. I’m just one of the guys. But with boobs. 😉

If I could give one bit of advice, I’d say no matter what you are doing, stop. Take a step back. Survey the situation. Study it. Figure out how it works. If you understand how it works, then you can usually figure out how to take it apart, fix it, and put it back together. I always learn how something works before I tackle it. A project may seem totally overwhelming at first, but if you just step back and study it for a few minutes and understand how the entire thing works, it will become much less overwhelming! At that point you can determine if you think you can take it apart yourself and fix it, or if it’s just too complicated and a repair person needs to be called.

* Install or fix your sprinkler system AT YOUR OWN RISK. This tutorial is based on my own personal opinion. What works for me may not work for someone else. If you try to fix your system and end up making a bigger mess than when you started, don’t panic. Back away and call a professional.

« You asked, I listened {finally}
Easy Ways to read BLOGS! »