My kitchen is coming along quite nicely!

Here’s the kitchen when we moved in: 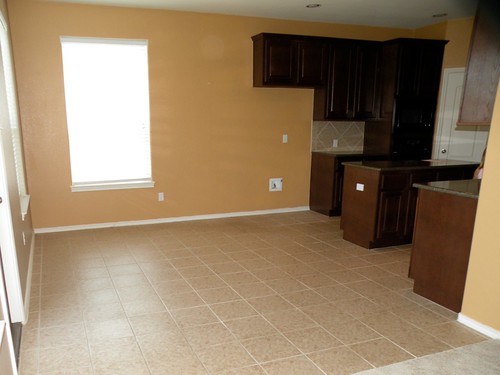 So much potential! Unfortch I haven’t painted yet (dagnabbit!) but in other good news, I have added some furniture, appliances, and accessories!

We bought a fridge that I’m totally loving. It’s an LG french door freezer on bottom and I’m in lurve. But what I’m REALLY in love with is my new painting by Rodney White!

I can’t believe that it actually doesn’t clash with the horrible paint color on the wall. I’m begining to think that Rodney White’s artwork can make anything look good. Hmmm, maybe I should print a painting of his on a t-shirt and wear it! 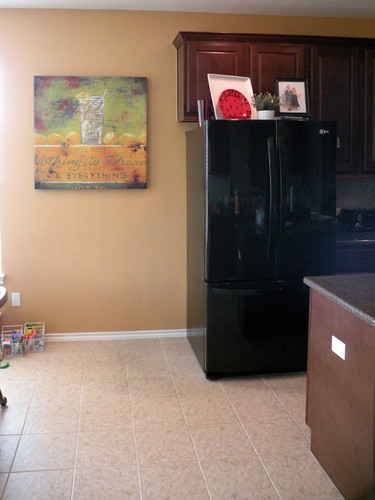 We were also in desperate need of a kitchen table. I had one before we moved here, but the kids and my sister ruined it so I sold it on craigslist before we moved. Kinda funny story about how it got ruined actually… For starters, my adult sister (not to be confused with my 9 year old sister who I would have actually expected to ruin my table) ok, so my adult sister LINDSEY (yes, I’m throwing you under the bus LINDSEY!) opened a chess set on my once-brand-new table and then proceeded to drag said chess set across the table on the chess board’s hinges carving out grooves in the top of the table. THEN, my same sister LINDSEY placed a steaming hot pizza box on top of the table. And then, to just add the final nail in that poor table’s coffin, my dearest daughter decided to paint her nails on the table – but first she had to use acetone nail polish remover, then spilled it all over the table causing the finish to be eaten off down to the wood. After that, it was pretty much downhill for that table and I refused to move it telling my hubbs that I’d rather eat off a folding table than that old crappy thing.

For the last 3 weeks I’ve been eating off a folding table.

But on Friday Ben couldn’t take it any longer and insisted we go buy a real table. Now, when a furniture purchase is on the line, I’m not one to argue, so before he could retract his statement we were in the car and on our way to the store.

We ended up purchasing a table from good ol’ Sam’s Club for like 700 bucks. Gotta love those Club stores, right?!

(We have actually been saving and budgeting for a new table, so it wasn’t a totally random flippant purchase.)

We got home late that night and immediately fed the kids dinner on our brand new table. 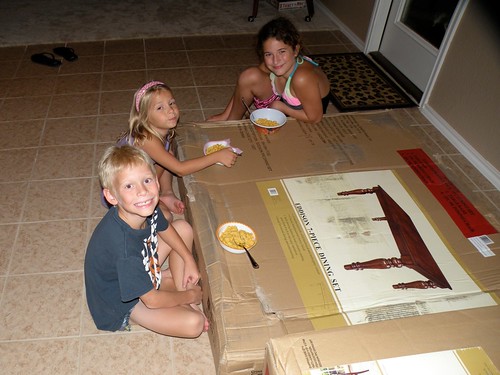 And then afterward we actually put it together. 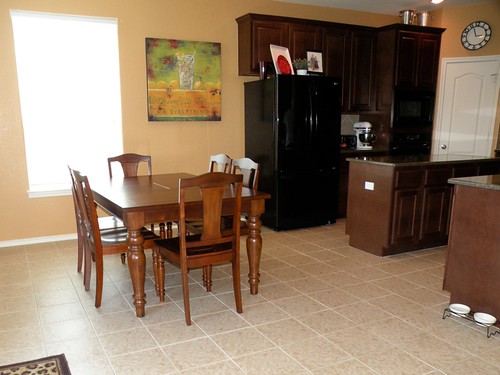 I am just totally loving this new table! It’s actually almost identical to my old table that LINDSEY ruined, but that table was a counter-height table (which looked so fun and cool but I swear I will never own another one ever again!) 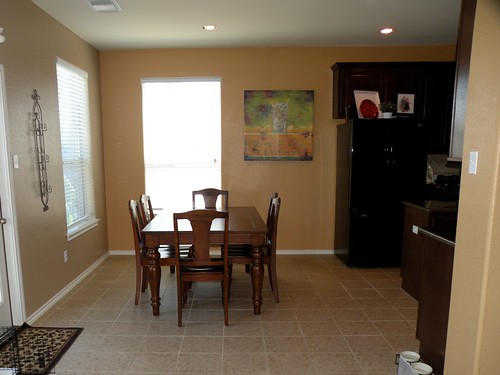 But my kitchen was looking kinda empty still. It needed something below my awesome picture. I hemmed and hawed for awhile about what to get and finally decided that a buffet would be perfect so that I could fill the space as well as add storage for the kids art supplies, our board games (we have game night at least once per weekend), placemats, linens, etc.

I’ve searched CL for about a week now for a buffet for this space and as luck would have it I found the perfect one on Saturday! It was the right size, solid wood, great lines, and an even better price. 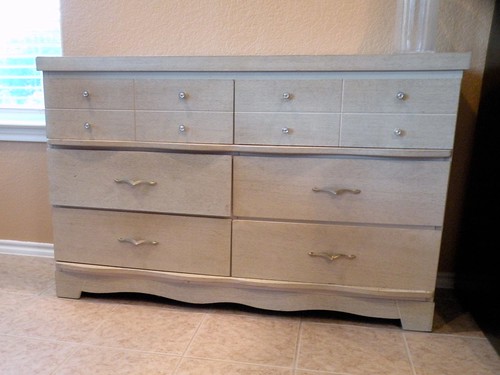 I’m going to eventually paint it (probably sooner rather than later), but I’m still trying to decide on a color. Should I blend it in with black? Or make it stand out with white? But will white stand out too much since nothing else in the kitchen is white? I’m thinking of going BOLD and maybe doing a green or yellow to match the painting? 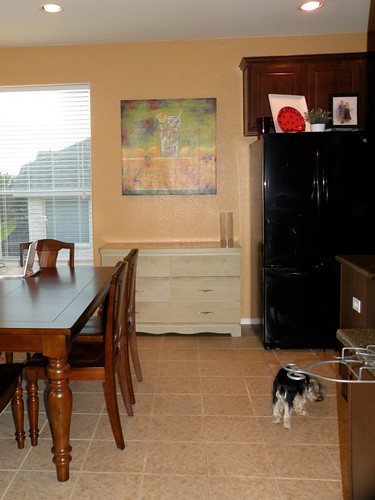 I’m pleased as punch at how well it fits the space. Once I get some color on it and some new knobs and handles, it’s going to be smokin’ hot. 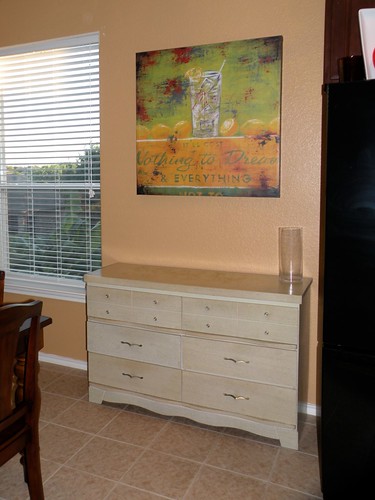 So now for the next few weeks I get to look at it every day and obsess about what color to paint it. Do you have an opinion about it? I’d love to hear your feedback on a color. 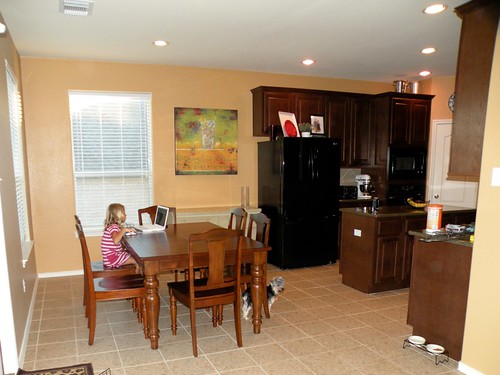 I am so thrilled that in one weekend I went from no furniture in my kitchen to now having a table and a buffet. Just try really hard to overlook all the crap on the counters, mmmkay?

The buffet is perfect for holding all sorts of stuff I want to keep near the table.

I’ve got markers and art stuff in one drawer… 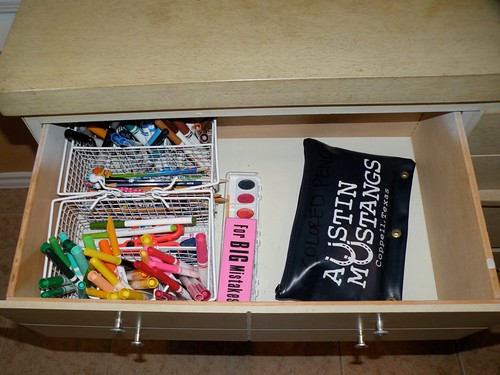 (In case you are wondering, the markers are stored in two sets of utensil holders that I bought while in LA from Goodwill. Oh, and don’t try to stalk me or anything – we don’t live in Coppell, Texas. We are in AUSTIN.)

Coloring books and paper in another drawer… 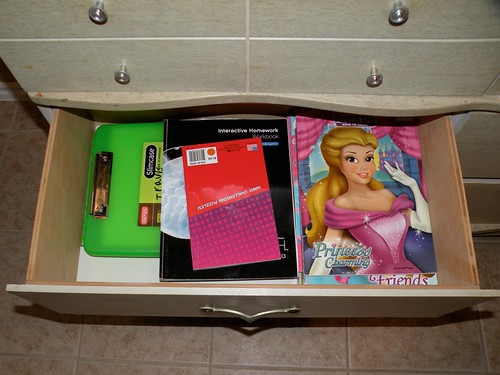 Board games in a 3rd drawer… 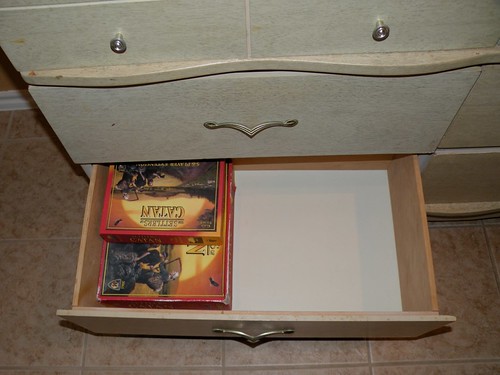 We LOVE board games – especially German-style games. Our favorites are Settler’s of Catan (pictured), Ticket to Ride, The Great Dalmuti, Killer Bunnies, Guillitone, and Carcassonne to name a few. 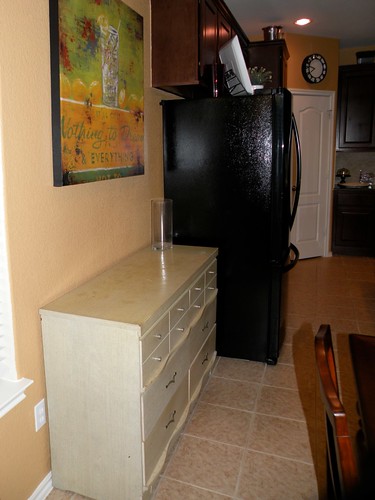 I’ve got table linens in a 4th drawer and two more empty drawers that will probably end up housing a few tools that I use frequently so that I don’t have to go to the garage 10 thousand times a day for a hammer.

For now I think I’m set in the kitchen for awhile. If I win the lottery in the next few weeks I’ll do more, but as of now I’m just happy I actually have a table and buffet and an awesome picture!!!

Here’s my bucket list of what I want to do in the breakfast area to feel like it’s “complete”. 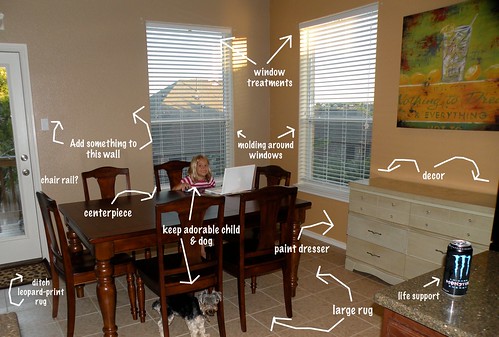 Does that hurt your eyes just looking at it? Ya, me too.

* window treatments
* molding around windows
* add something to the wall in between the window and door
* chair rail maybe?
* centerpiece on the table
* rug under the table
* paint the dresser – color ideas??
* decor on top of the buffet
* new rug at the door

Ya, that’ll take 5 years I’m sure. It’s good to have goals. It gives me something to look forward to.

Some people might see this list and feel totally overwhelmed but not me! I live for this kind of stuff. I love it. I think the constant fixing up and decorating is so fun. If I ever had my house totally finished, I’d have to either redo it all again or move! The hunt for the best bargains or that perfect piece is half the fun! 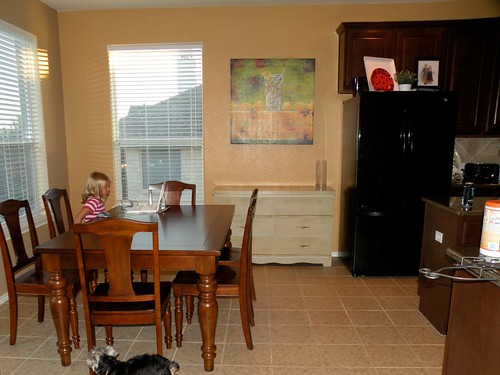 Oh, and don’t forget to leave your input for color choice for the buffet.

And on a side-note, the kids are starting school Monday. I can’t believe my babies are now in 3rd and 1st grade. Time sure does fly.

« Bringing Jersey home with me
TDC gives me anxiety »