Before I dive in and show you guys my awesome entry table transformation, I have to take a minute to give a big huge

to Sarah over at…

As some of you know, I’m a HUGE FAN of TDC. Her’s is my favorite blog and one of the very first blogs I started reading ‘back in the day’.

On Friday Sarah did a feature about House of Hepworths. I had no idea she was going to feature me, and when I saw it I had to remind myself to breathe and my husband almost had to give me CPR to get my heart pumping again. Sarah didn’t only tell her readers that she likes me, she gave an embarrassingly flattering post all about me. I just want to publicly tell Sarah, “Thank you! I’m *still* speechless about how many compliments you gave me. Thank you.”

Here’s a link to the feature: HoH Feature @ TDC

In November I was lucky and scored the perfect table for my entry way from IKEA for half off! Here it is all spruced up for Christmas: 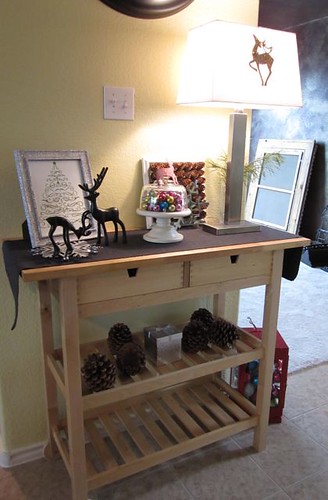 I’ve said for months that I’m going to paint this table, and a few weeks ago I took on the task. I was picturing a beautiful deep dark stain on the top butcher-block and a bold bright paint or stain on the rest of it. It was beautiful in my mind. So I set out to find the perfect color for the body of it and stumbled on some RED stain from IKEA. Perfect. 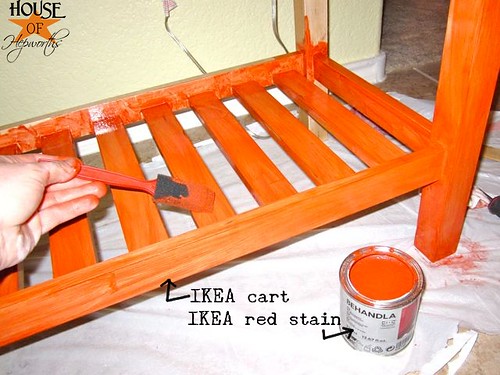 I painted it on and gave it a few minutes to sit, then wiped away the excess. 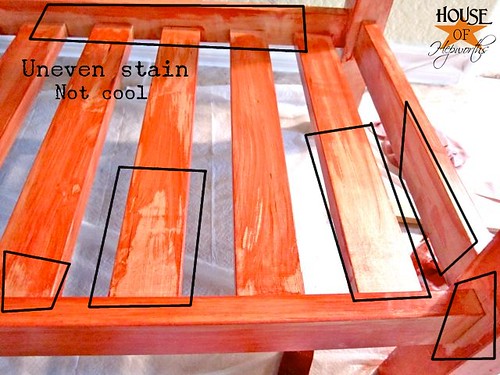 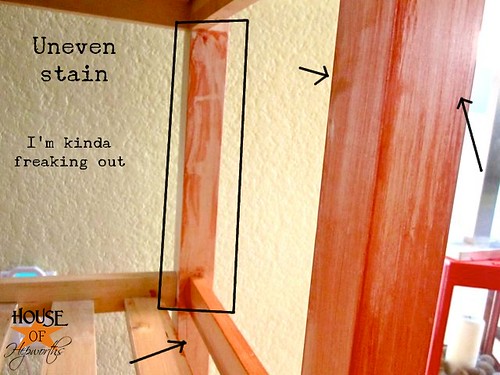 The stain refused to stick in some areas. This table was suppose to be “raw” but after cursing at it for a few minutes I realized that because it was the showroom as-is piece, they had coated it with some type of clear top coat. *&%*$#*!

So I did what I knew I should have done all along; I busted out the sander and went to town on it. 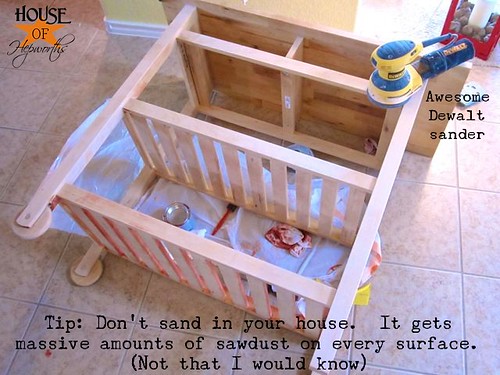 So first off, don’t sand in your house. Srsly. Don’t do it. ESPECIALLY if it’s an electric sander. I knew better, but I was sick and lazy, so I sanded anyway. And now, weeks later, I’m still wiping saw dust off everything. It even made its way upstairs. I have wiped it off counters, railings, baseboards, windowsills. Just don’t do it. Mmm-kay?!

I took a break from the body and decided to tackle the butcher-block (after it was sanded). I don’t know what type of top coat IKEA used on this cart, but this staining business turned into a freaking EPIC FAIL. 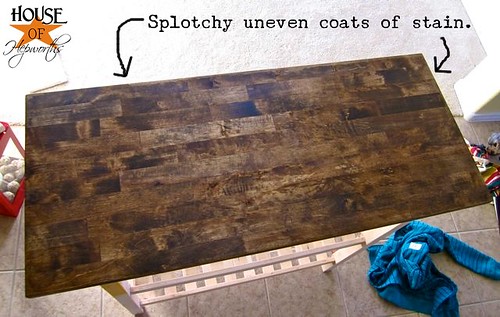 Even after sanding, the dark stain would not take evenly. It looked even worse in person. 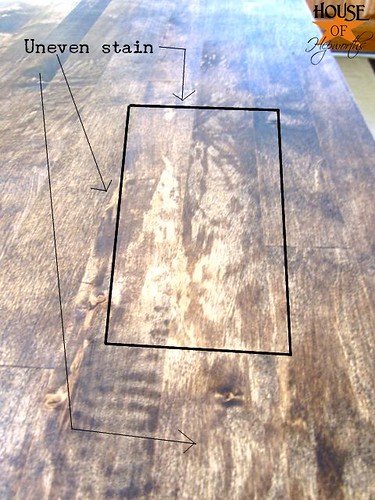 I stained this thing three times trying to get a nice even surface, to no avail. 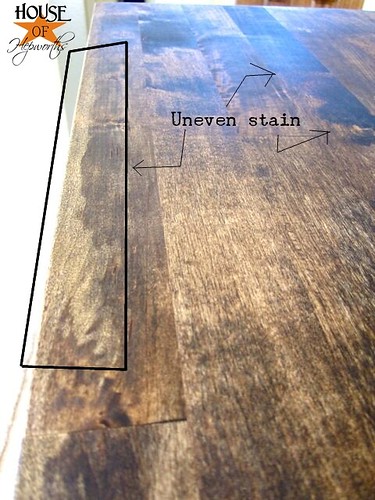 Now, if you follow me on my Facebook Fan Page, you’ll know that I was getting pretty fed up with this little ditty. I even threatened to throw the dang thing off my balcony.

Fortunately I was too sick and tired (literally) to even pick it up, much less toss it over my balcony, so it narrowly escaped death.

I lived with the uneven dark stain for a few days trying to will myself into liking it. I just couldn’t get past it though. It was too ugly. Also, I gave the red stain one more go and it still looked horrible so I poked around in the garage and found some tangerine-colored paint I bought two years ago. I said, “What the heck” and threw caution to the wind and tried out the orange. 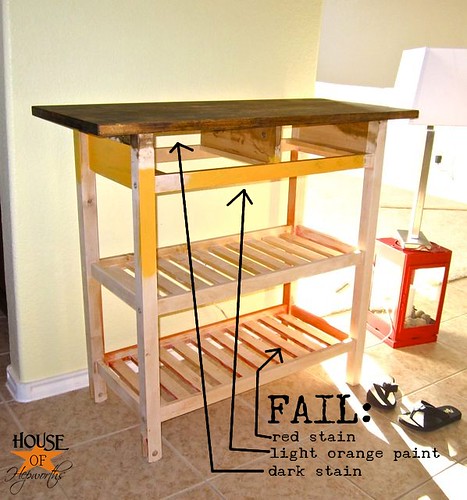 What is worse than an EPIC FAIL? Because that is what this train-wreck was turning into. A freaking epic fail. This fail was so bad that I was actually sweating thinking I couldn’t even recover it from the mess I had just put it through.

But I took it outside anyway and gave it an even better sanding on top. No matter how much I sanded I could not get that gross clear top coat off. I’m not sure exactly what IKEA used, but it soaked the cart to the bone.

So I had to just throw out the stain idea. This cart could not be stained. Once I accepted the fact that my entry cart’s fate involved paint, I went to my stash and found some that Krylon had sent me (here’s your plug, Krylon). 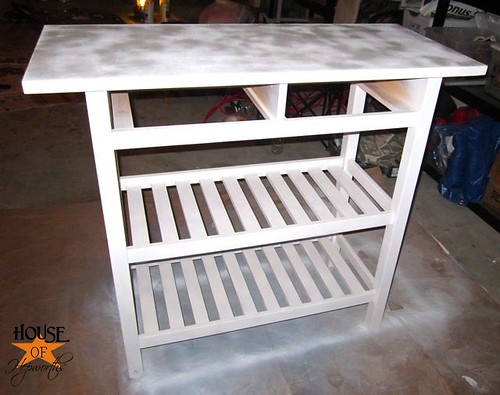 (I didn’t paint the sides or inside of the drawers; only the fronts.)

The next day I used this Krylon Satin spray paint in “Avocado”. 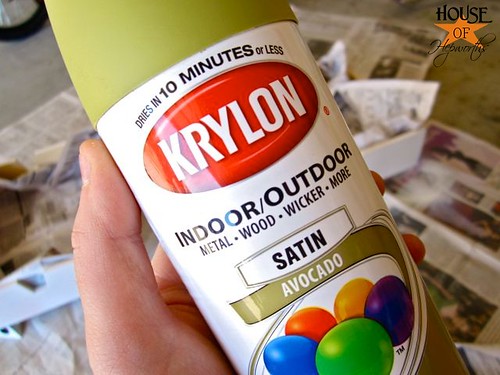 I ended up using 4 cans of Avocado paint. Krylon had sent me a few previously as part of a promotion, but I did have to run out to the hardware store to pick up two more. 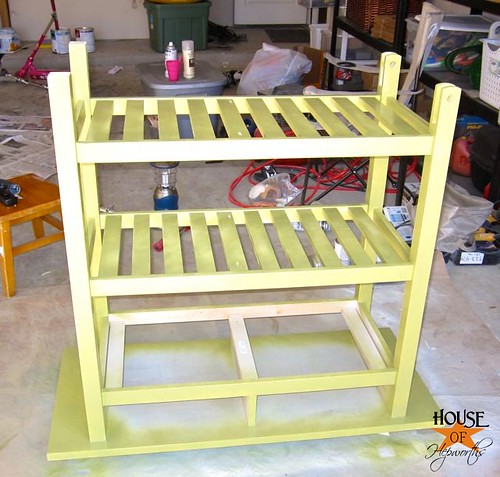 And finally, the cart was done. It’s a miracle. 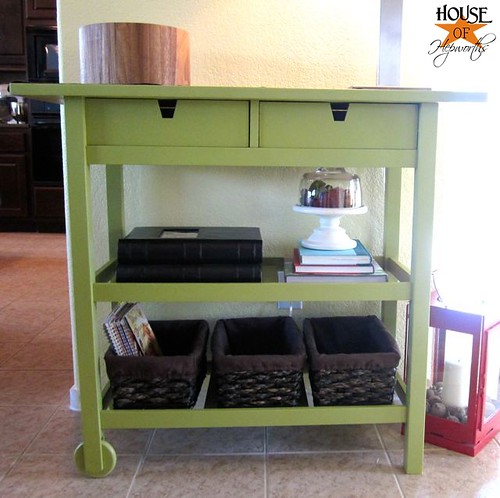 It isn’t what I had hoped for initially, but sometimes when you tackle a project you just have to roll with the punches and change it up as you go. 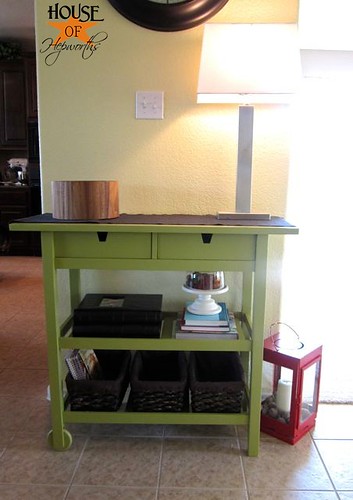 Honestly, I’m glad the stain was a total fail because in the end, I love the green even better than the original vision I had for it. 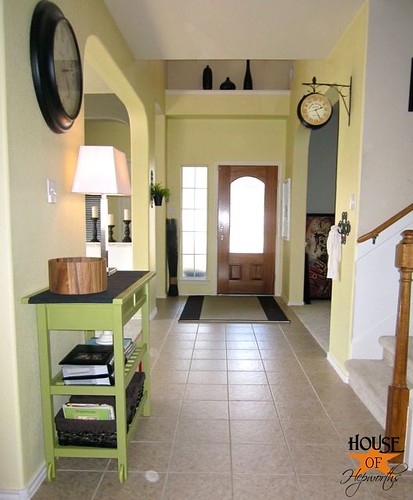 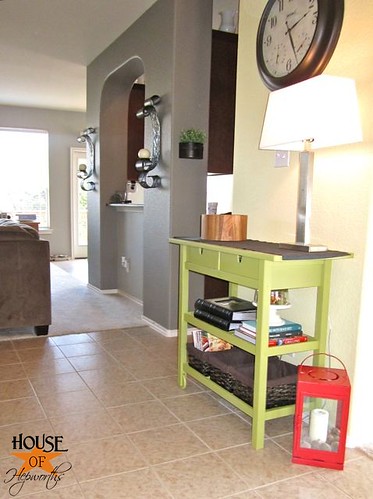 If I had to pick one word for this project (besides “paininmyass”) I’d pick “adaptable”. When you are working on a project, you have to be flexible and be willing to adapt as the project goes. 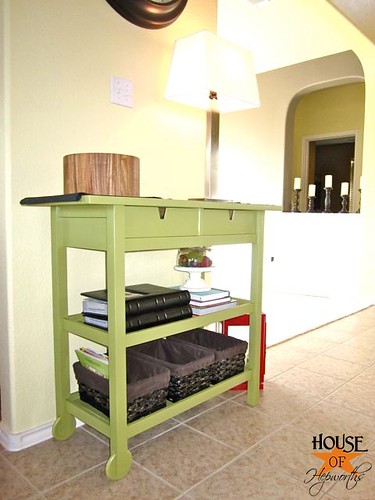 And sometimes when you are elbow deep in stain that wont stick and you want to just toss your furniture off the balcony, take a step back, adapt, and come up with a new path for your project. In the end, you may even like your new way better.

I sure do. I love the green. Dare I say I’m even a little happy that my vision was a bust so that I could be lead to a green entry table?

Have you chucked anything off your balcony lately?

« Master Bathroom pics as “before” as they can get.
Apparently I’ve got YEARS worth of projects for my blog »