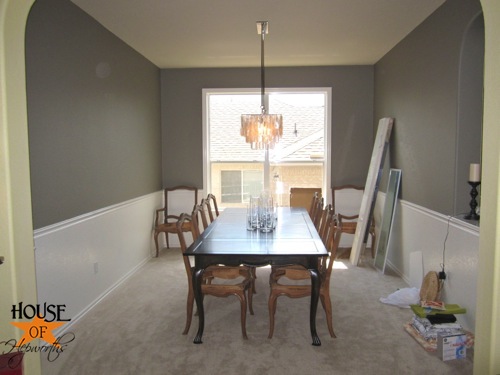 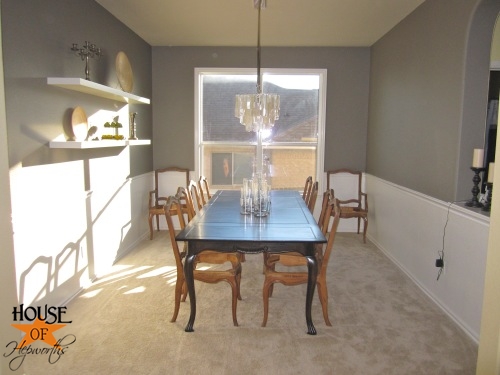 There really isn’t much to say. I bought the shelves at ikea and followed the directions inclosed to hang them.

But, in the spirit of blogging – taking totally mundane chores and somehow make them interesting by writing about them, I’ll go ahead and blather on about the shelves for a minute or two. Or ten.

I first decided to hang these awesome floating shelves in the dining room after seeing them over at I Heart Organizing. 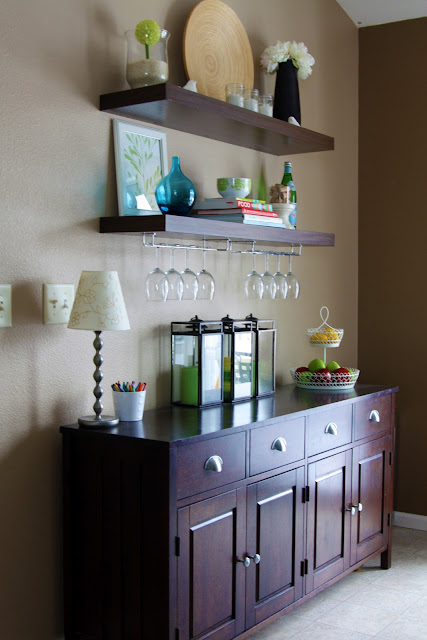 I mean, seriously. Who wouldn’t be inspired to hang floating shelves after seeing Jen’s?

After that I searched for a few more inspiration pics, just to make sure I was 110% sure about my decision to copy Jen. 🙂

Young House Love hung some in their previous digs:

Then Leanne from Organize and Decorate Everything went and hung some in her breakfast room. Sold. After seeing these three pictures, I was officially twitterpated. Floating shelves were my destiny. (Yes, I’m aware that I’m being ridiculously over-dramatic about this.) I first mentioned my love for the floating shelves in this post.

Fate sealed itself when on two separate occasions I found the exact shelves I needed (in the right color and length) in the as-is section of ikea (yes, I do live there thankyouverymuch). 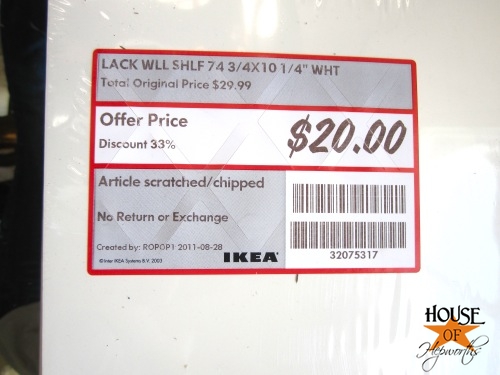 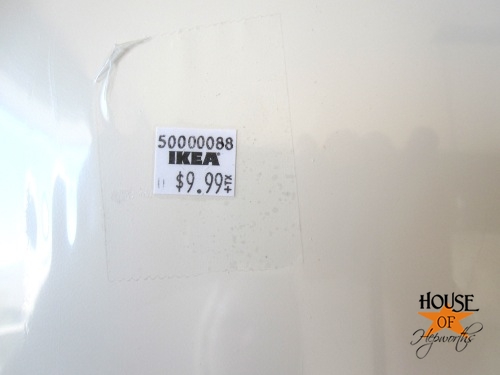 Ironically the $10 shelf had less damage than the $20 shelf, but neither had any that would be visible once the shelves were hung, so I bought them.

The only space planning I did was to very haphazardly hang two pieces of painters tape on the wall, just to give myself an idea of where I wanted the shelves. The tape wasn’t even the right length and it was certainly not level, but it gave me a good visual anyway. 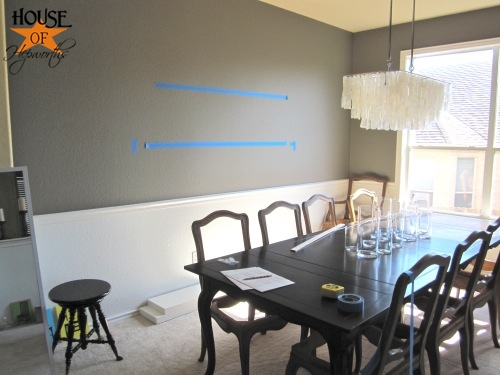 After I decided on the height placement, I wanted the shelves centered on the wall. I knew I was going to hang curtains so I measured the length of the wall minus 3″. This way the shelves will be centered between the left wall and the curtain so that they will appear centered once the curtains are hung. 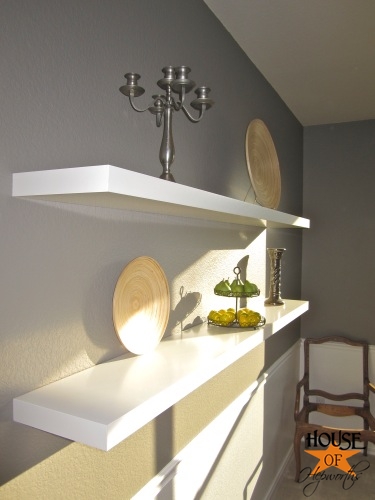 Hanging them wasn’t that tricky, but they each needed SIXTEEN anchors and screws, all of which did NOT come with the shelving. This ended up being an additional cost of $10 total just for hardware, so keep that in mind when you plan on hanging shelving from ikea. Most doesn’t come with the screws. 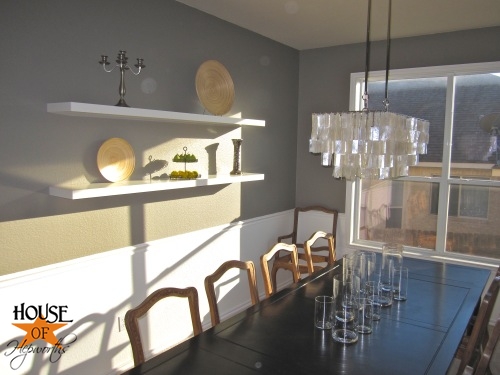 One thing I’ve learned is that this room photographs much better in the morning than at 5pm. Sorry all of my pictures have a horrible glare on them. 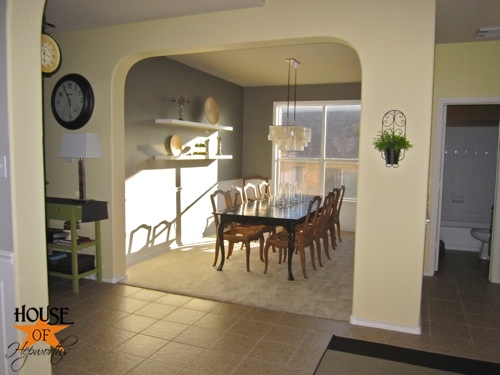 Also, I may be good at hanging shelves and tiling and refinishing furniture, but I’ll tell you what, adding little bits of decor into a room is not my strong-suite. These shelves are ZERO percent staged and ready. I just threw some crap on them and took the pictures. Look closely and you’ll notice most pictures have a different combination of decor on them. 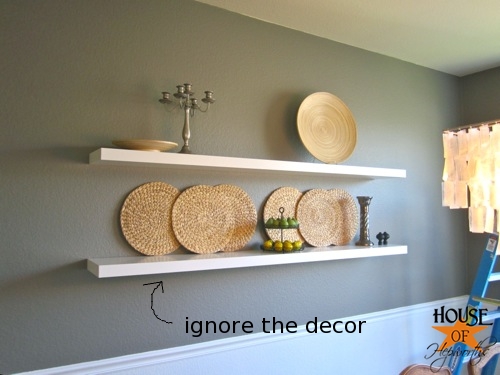 I pretty much “staged” them by piling a bunch of crap on them that’s been sitting on the floor in the dining room for months. I do have a few things in mind for decorating the tops of the shelves, and I promise, when this room is finally done and I do a final reveal, the decor will look good. Pinky promise. 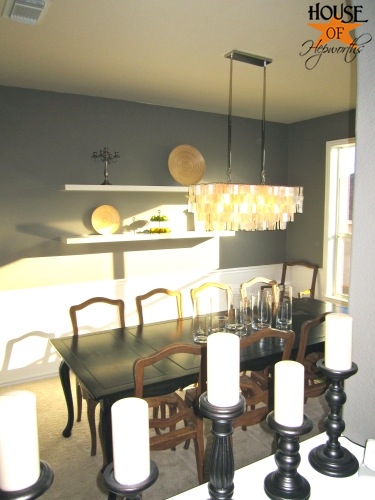 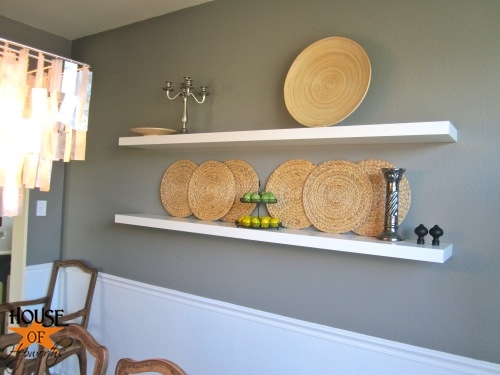 It is very satisfying though knowing that I’m one step closer to finishing this room that I started eight months ago. 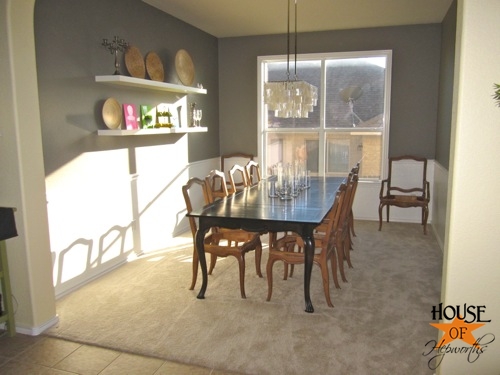 I can officially check off 7 things from my to-do list. Only 17 more to go. And I’ll tell you a little secret… I’ve finished 2 more things, I just haven’t blogged about them yet. Woo hoo! I’ll show you soon, promise.

« Hookin Up with HoH #69
A whole lotta Halloween Decor Inspiration »