How’s that for a title? I kill even myself sometimes.

Let’s just get on with the post, shall we?

Before Valentine’s Day two weeks ago, K and I made a bunch of Chocolate Covered Strawberries. 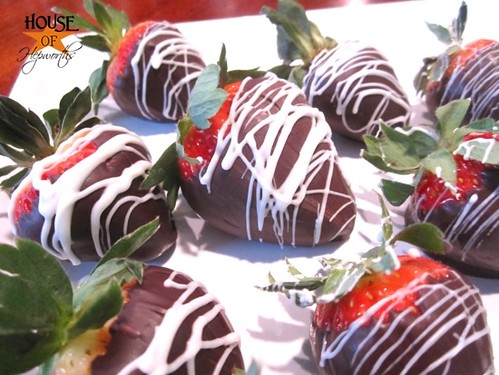 During that chocolate making session we also made another fun treat! And let me tell you, these bad boyz are delicious. 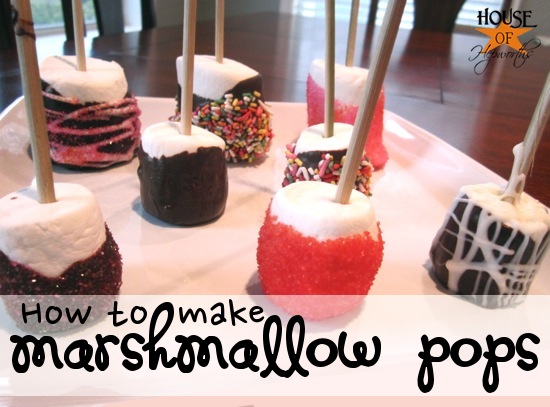 Yup. We took a ball of sugar, dipped it into chocolate sugar, then dipped it again into sugar sprinkles.

I prefer to call them “The Perfect Sugar Trifecta”. 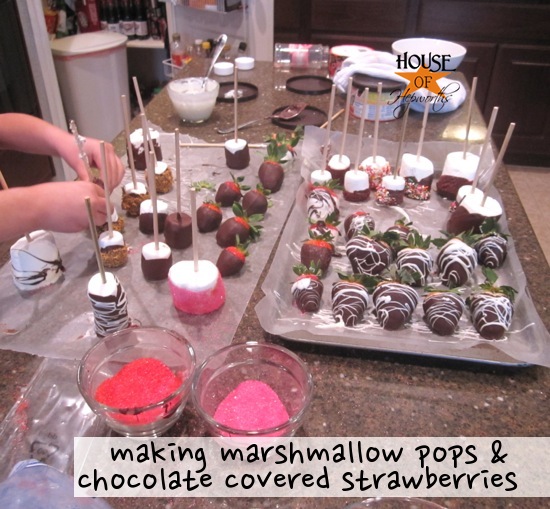 I’m pretty sure the strawberries were the only healthy thing on the island that day!

To make these Sugar-on-a-stick delicacies, we bought marshmallows and sticks. Except the grocery store didn’t have Popsicle or sucker sticks. So I found these mini skewers on the grilling isle. 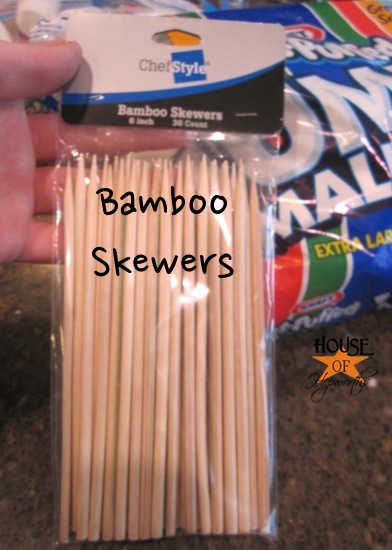 We were totally just going to do good ol’ regular marshmallows, but then we saw these monster-truck-sized ones too! 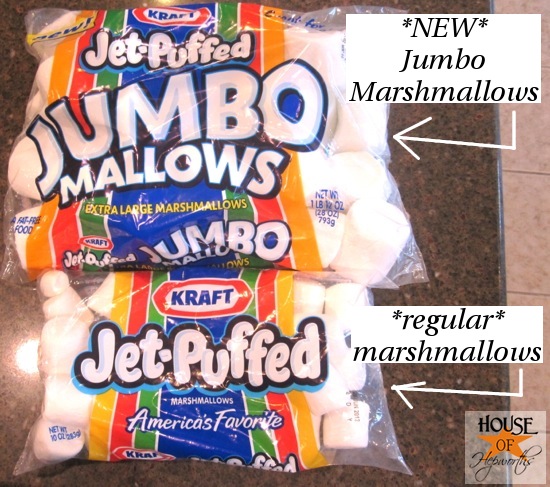 Jumbo. JUMBO? Are you kidding me?

So of course I had to buy them. And let me tell you, the jumbo marshmallows are the size of my fist. Not kidding. 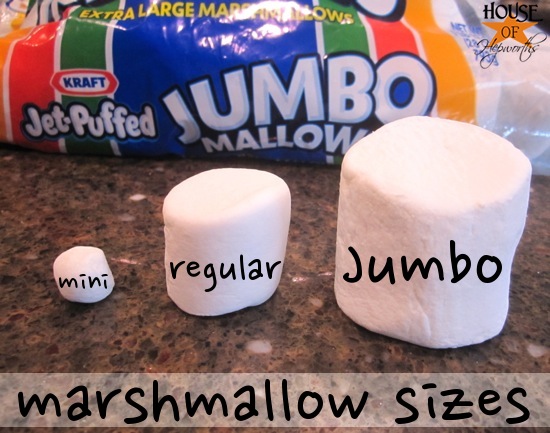 We anticipated quadruple the sugary goodness of a regular marshmallow (not to be confused with the pathetic wimpy mini marshmallows that are only good for adding to jello salad or rice crispy treats).

However, the fist-sized jumbo marshmallow was so ridiculously enormous that it wasn’t even fun to eat.

So, in my very professional opinion, I’d say pass on the jumbo ones. 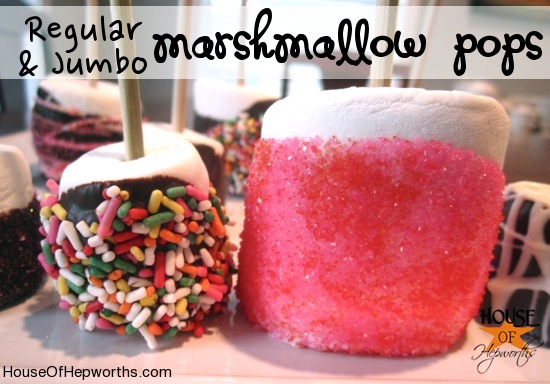 The Marshmallow Pops are so easy to make that I didn’t even document it in photos. So, here’s the deal…

Take a marshmallow and stick it on the skewer. Dip the skewered marshmallow into melted chocolate. Remove from chocolate, tap off excess, then dip into a bowl of your favorite topping. Set on wax paper until the chocolate has hardened. Piece o’ cake.

We made a variety of flavors including: 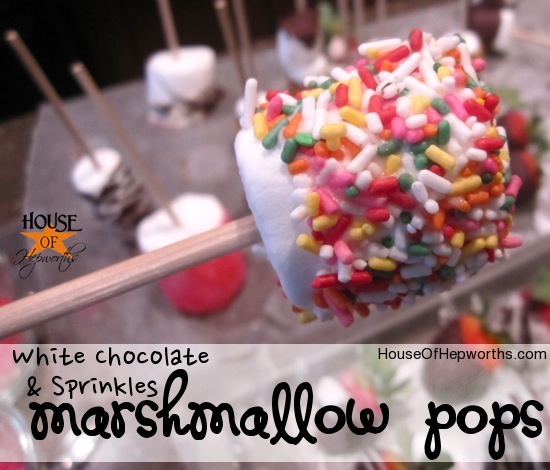 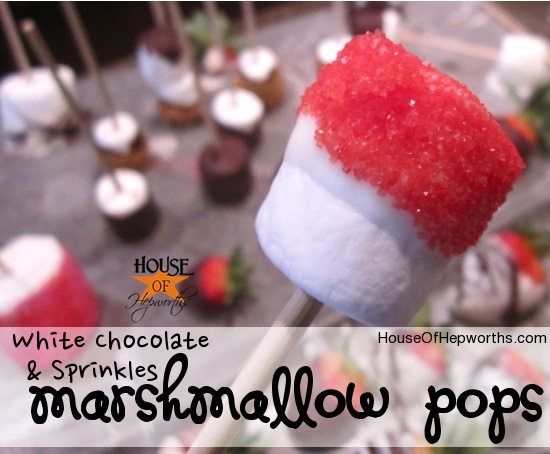 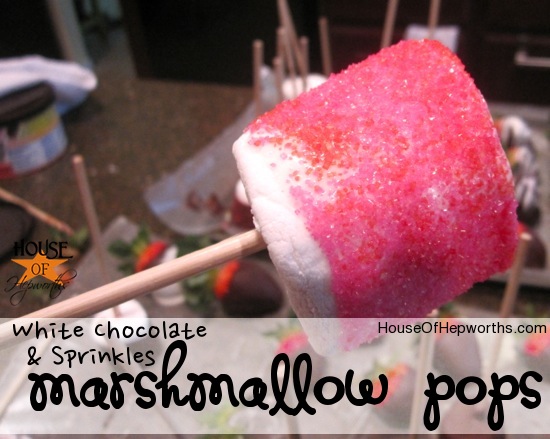 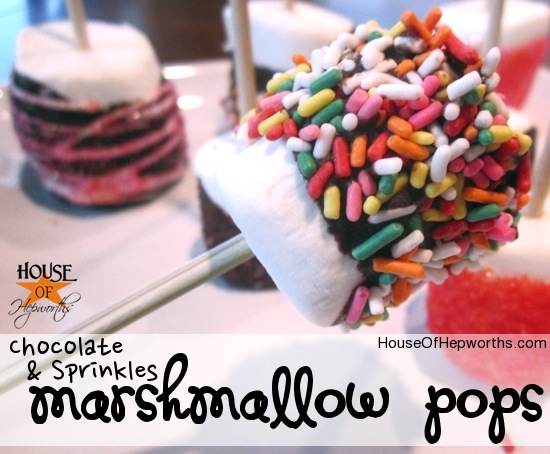 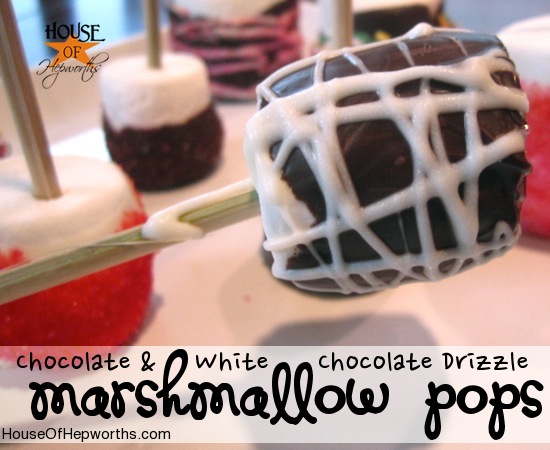 After lots of sprinkle dipping and chocolate drizzling, we got antsy, which brought on even more creativity.

We tried a double marshmallow pop, which was fun to eat, but was hard to dip in the small chocolate container. 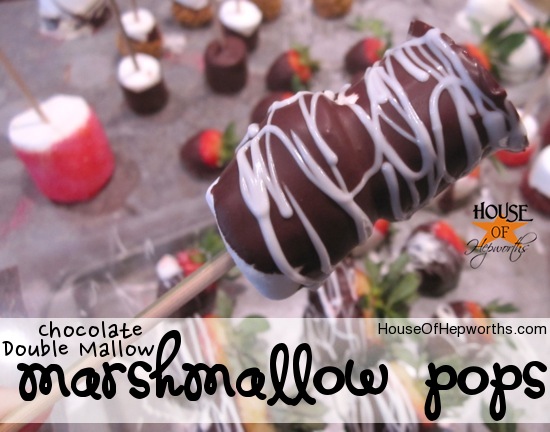 I was struck with the idea of graham crackers.

Now, I don’t know if these have been made before or not, but for me, the idea to make

was a brand new idea. Uncharted territory, if you will.

So I went there. Oh you better believe it. I smashed up a few graham crackers, then I rolled that chocolate dipped marshmallow in the crumbs.

And at that moment, the most delicious, most amazing treat on the planet earth was born. 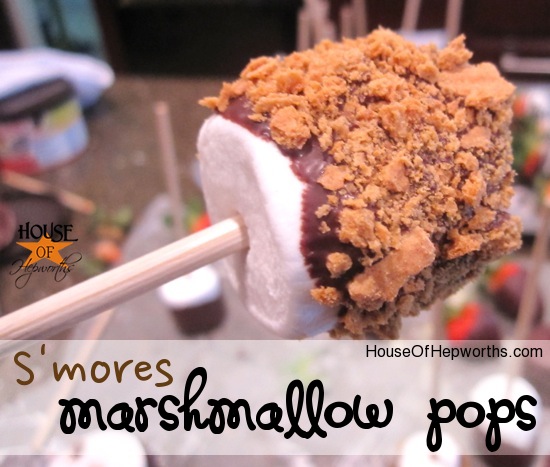 The sprinkle pops are good, don’t get me wrong. But the S’mores Marshmallow Pops?

They are literally like a bite-sized S’more on-a-stick. They taste as good as a real-for-real straight-off-the-campfire S’more. And I do not take S’more making lightly.

If you do nothing else this year, for cryin’ out loud, please make a S’mores Marshmallow Pop and just try it. Humor me. I swear, you will not be disappointed.

We ended up making 50 more the night before Valentine’s day so the kids could share them with their classes at school.

I would say we made a plethora of them.

They were seriously that good.

When we were at Disney World in December, I had the fortune to purchase a chocolate-dipped marshmallow from Downtown Disney. This idea is not my own, I simply recreated it. However, I’m being totally honest when I say I have never seen a S’mores Marshmallow Pop… ever. So, let me give credit to Disney for the chocolate marshmallow pop combo, but I’ll claim victory with the graham ones. M-kay?

Are they like, one of those things that’s been around forever and I’ve been living under a rock this whole time? Well, if so, and if you are living under a rock too, I’m just spreading the wealth of recycled knowledge. Just doin’ my part to make the world a better place.

This is also a great activity to do with your kids.

And since I’m on the subject of candy making and baking, I’ll leave you with a few more yummy recipes.

You are welcome. xoxo. 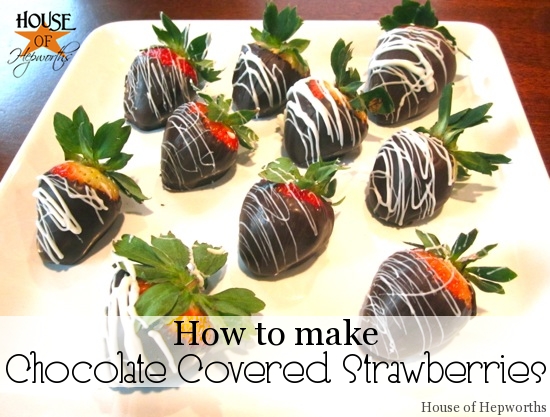 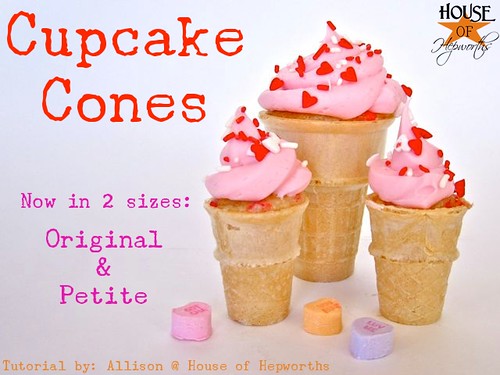 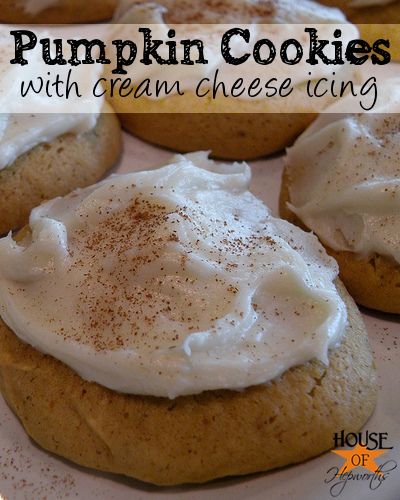 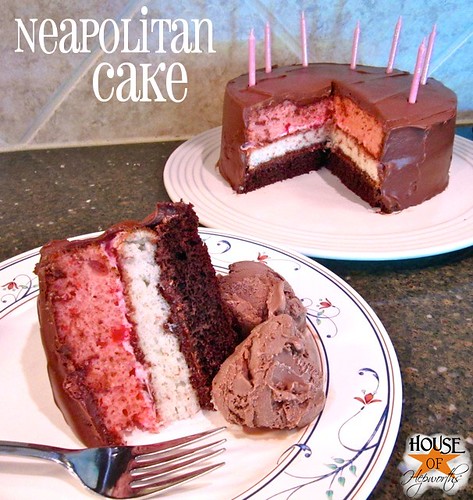 I am not liable if you gain 50 pounds from making and eating all this yummy stuff.

Have a finger-lickin’ good day!