Hey guys! This kitchen renovation is in full force around here. As promised, I’m back with a few more updates so you can follow along in as close to real-time as I can muster.

Monday night the cabinet maker… (and his assisstant? Helper? Friend? I’m not sure exactly who the other guy was. He only spoke Spanish and the extent of my Spanish is “Hola! Como estas? Muy Bien! Y too?”. <-- That's what 3 years of high school spanish will do for ya.) Okay, so Monday night the cabinet guy and his buddy came over to do a final measure for the cabinets. We had to have the entire kitchen cleared out before then, hence the frantic gutting of said kitchen over the weekend. 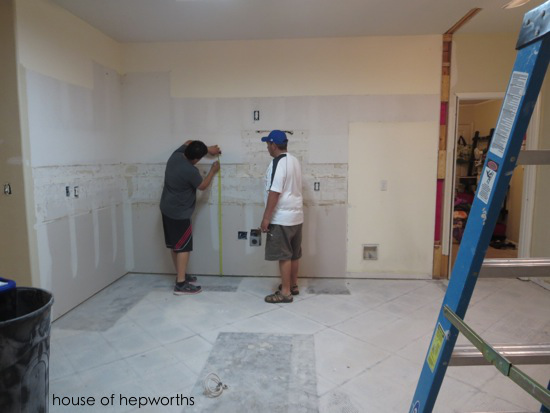 Can I just say I really really like this cabinet maker? His name is Armando and he runs his own little custom cabinet business. From what I can tell he works pretty much exclusively through the builder we hired, so if you want him to do your cabinets for you you have to hire the builder. He is so nice, and the more he comes over and chats the more Ben and I just like him. Super duper nice guy.

So he measured and drew out our kitchen old-school on graph paper. If you can interpret his plans, you probably will notice that the layout and plans have changed slightly from the first time I told you about the renovation. I will give an update on the new layout and ideas in another post. 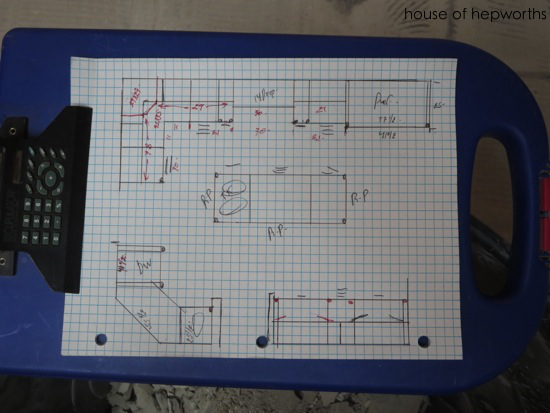 Ben works hard at his real job, so he hasn’t been much help in the demo department since Sunday night. I have been pulling up the old wood flooring, and trying to do so in a clean manner so we can salvage the floor and hopefully put it on craigslist. It’s taking longer than I assumed it would though because whoever laid it glued each plank together in addition to their locking click together design. The planks are mostly coming up in one piece, but because of the glue I’m not so sure how salvageable they will be. 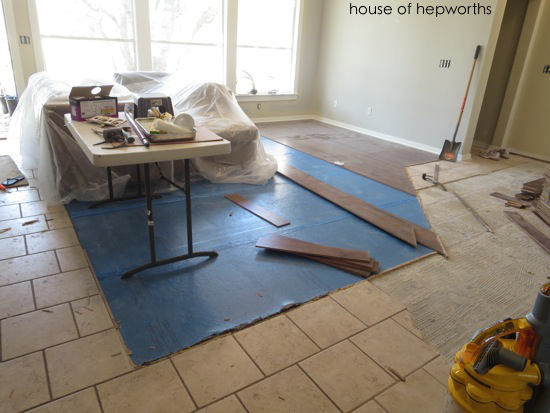 Yesterday afternoon the big ol’ dumpster was delivered. It was very exciting to watch and was an entire family affaire for all of us. 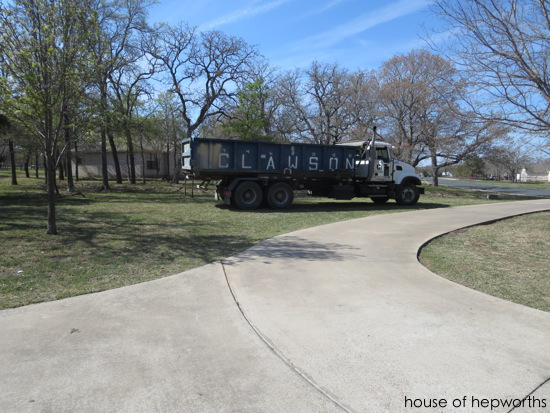 The driver pretty much just backed into our yard and then dumped the thing using some hydraulics from his truck. We were mesmerized and I took about 25 photos of the entire production. 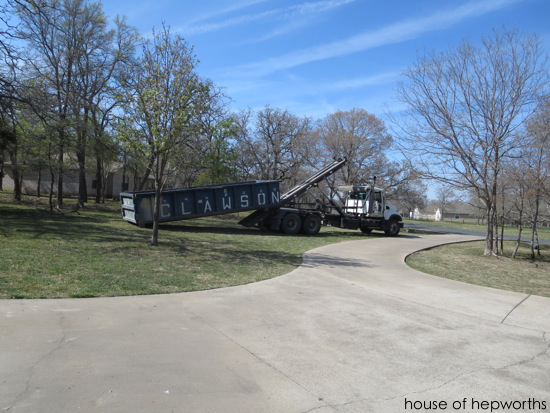 The driver showed us how to open the back door, which was a nice surprise for us. I assumed we’d be lifting and dumping everything into the dumpster so we are relieved that we can just use a dolly and a wheelbarrow to move trash directly into the bin. The kids were very excited about this fun new addition to the yard, and we’ve had to remind them multiple times since then that this is not a toy. 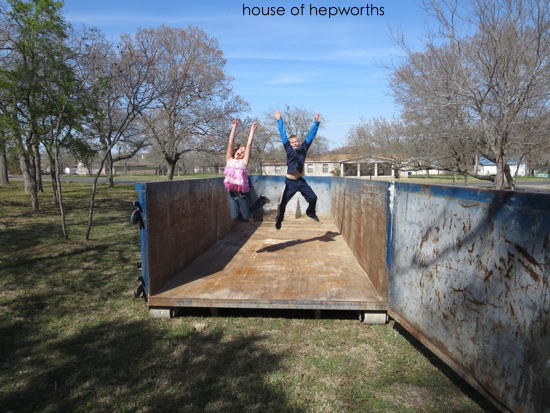 I also want to address how we’ve been living, or more specifically eating without a kitchen to cook in. Well, it hasn’t been the easiest, and we’re only a few days into the ordeal, so I’m sure our lifestyle will evolve over the next several weeks, but for now we’ve set up a makeshift kitchen in our dining room. We moved the fridge into the dining room and set up our old microwave on a cart to use until we get it sold on CL. We also have a grill outside. 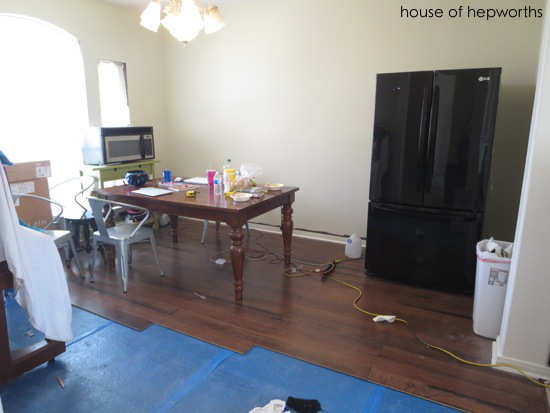 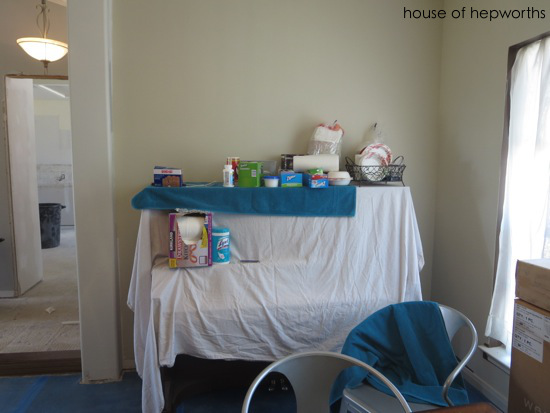 The guest bathroom in the hall has turned into our kitchen dinette area. I wash big items in the bathtub and small stuff in the sink, but we have been trying to use as few washable items as possible. I went to Costco last week and stocked up on paper plates and bowls, and plastic utensils. In case you are a detective and are squinting to see what all is in the photo, you may have noticed two coffee makers. We aren’t that obsessed with coffee – the kids use the Keurig for making instant oatmeal. 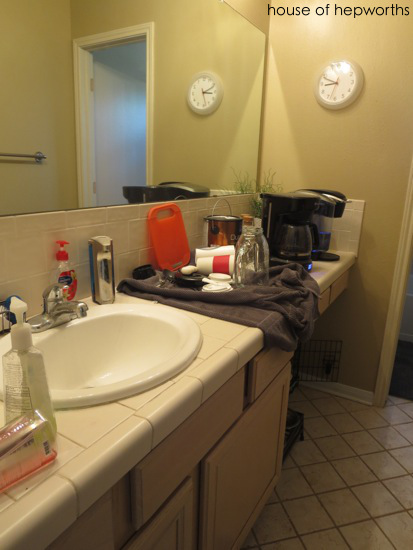 John, our builder, also stopped by yesterday to go over all the steps in the renovation. He is going to be scheduling the electrician, plumber, and framers to come out and is helping us get our countertops and flooring selected.

I was going to lower the bar to counter-height myself, but we also need a few other things framed out, so he is going to have his guys come do all this work. I chatted with him about turning the pantry door and also the door to the mud room (which we removed when we moved in) into pocket doors, and he said he’d make it happen so I am very excited about that little project as well. I have never lowered a bar, or turned a normal door into a pocket door, though I am 100% confident I could do it myself with some research and enough time. Well, there is only one of me, and I have a list a mile long of stuff I have to do, so having his framers do it all in a day makes the most sense for us. Of course, this is the plan for now before I’ve gotten a quote from the framers, so if they are too expensive my tune might change and I might be doing it all myself anyways!

On my list for today:
– Finish pulling up all the wood flooring and the underlayment
– dump all the 6 trash cans full of tile into the dumpster
– start hauling the piles of trash from behind the shed into the dumpster
– remove several large areas of sheetrock (the plumber and the propane guy need it removed before they start their work)
– get more organized with the kitchen areas and all the other random crap all over the house
– finish washing all the laundry, and then fold a total of about 10 loads that are currently in a heap on my bedroom floor
– run the kids to all their activities this afternoon
– worry about dinner
– start a post about the new layout plan

Somehow in there I also have to actually mother my children.

On my list for tomorrow:
– I don’t know. I can only think one day at a time.

I’ll try to get that post for you guys by tomorrow, but we’ll see if I have any energy left to write it. Also, when I do lots of manual labor (painting, hauling, hammering, lifting, etc), I start to get carpel tunnel in my wrists (just another fun side-effect of being pregnant 12 and 9 years ago), so sometimes after a few long grueling days of hard labor my hands are too numb to type. Hopefully that won’t be the case, but I’m already starting to feel it, so… ugh.

« Let the kitchen demo begin!
The plans for the new kitchen layout »