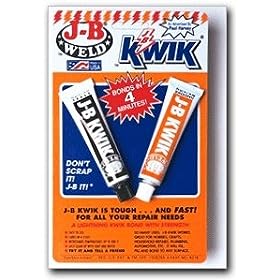 This stuff ROCKS! I know, I’m a nerd. But seriously, my dad told me about this stuff, and I have to say, I am hooked! You can glue ANYTHING together! ANYTHING!! I’ve glued a cabinet back together, a stripped out windshield wiper, my laundry hamper, a car console, a car cigarette lighter, the button on my cruise control, screws that kept falling out, a car interior light that was falling down, etc.
It all started when my windshield wiper froze to my windshield last year. The retard that I am, I turned on the wipers trying to force them to un-stick. Well, it stripped the threading from the wiper arm and I had to buy a new one. $60 later I had a new wiper and was ready to go. Well, a week later Travis turned on the wipers and then climbed on the hood of the car and stepped on the brand new $60 wiper… stripping the threading off of it. Ugh. I called my dad in a panic. That’s when I was introduced to one of the greatest products ever made. I bought the stuff, read the directions, and glued that wiper arm straight to the bolt under the hood! That puppy’s not going anywhere! It’s been a year and the arm is better than ever! Now I’ve become a bit obsessed and “look” for things to permanently bond together. There’s something really fun about mixing the two tubes of stuff together and knowing that whatever you stick it to will never come apart – EVER AGAIN.

Okay, that was a very fun tangent. I just got finished getting Ben’s truck ready to sell, so I’ve had a bit too much fun with the J – B Weld.

Next month: Mrs. Fix it. Trust me, if it involves toilets, washing machines, sinks, cd players, broken appliances, cosmetic defects, anything involving screws, gears, washers, bolts, etc… I can probably take it apart and fix it. And if not, well, it was already broken anyway, so what’s the harm?

« It all began with a small re-caulking job…
Fireplace makeover »