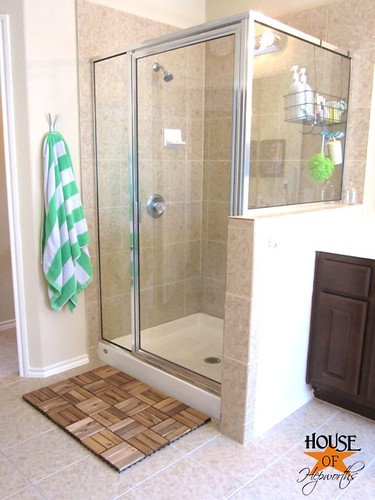 Looks pretty nice. But there’s something wrong. Can you figure it out?

I’ll give you a hint. 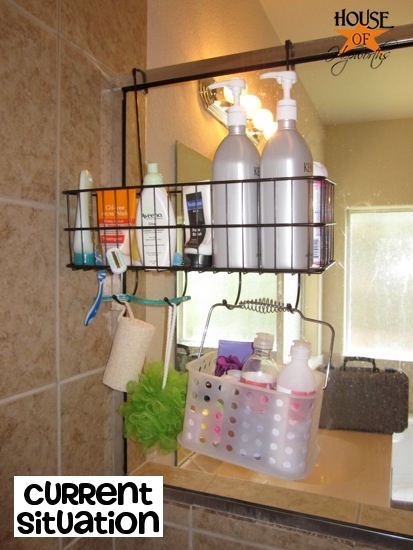 We are using a random over-the-door basket organizer inside our shower instead of a shower caddy around the shower head. 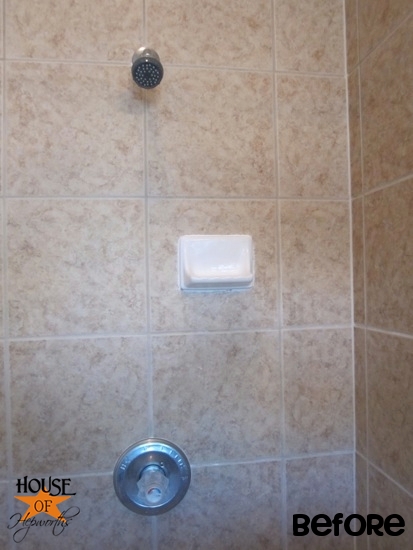 I mean, seriously, we have a perfectly good shower head right there just begging for a nice organized shower caddy.

But do you see that little soap dish all up on the shower head’s grill there? It’s so close to the head that a shower caddy wont.fit. I guess I could buy a specialty one, but I like the nice chrome one I brought with me from my previous home. {sniff} 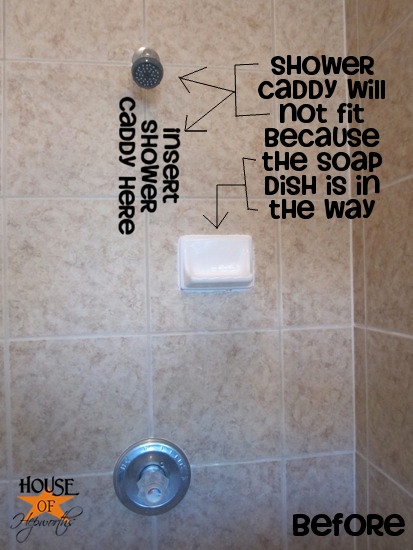 Instead of dropping $30 on a nice brand-new narrow shower caddy (or other feasible option) I decided it would be a better investment to purchase this Grout Removal Attachment for my Dremel Multi-Max (for $30). 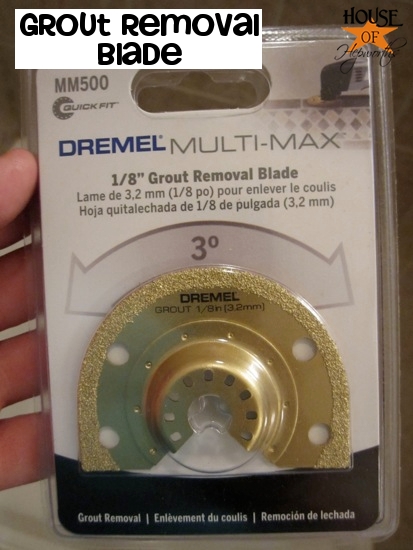 For what?! Well, to remove the grout around the soap dish so I can remove the entire dish. THAT’S “for what?”. Dur. 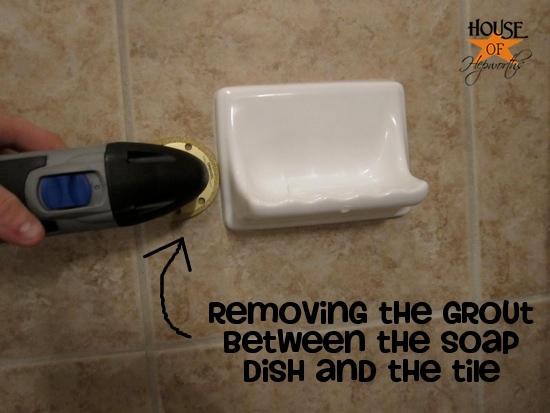 The soap dish seemed like it stuck out far enough from the tile that I assumed it was glued on top of the tile, so why NOT remove it?! Sounded like a great idea to me!

So I cut and cut and cut, and I got all that grout removed from around the dish. And then, the moment of truth… 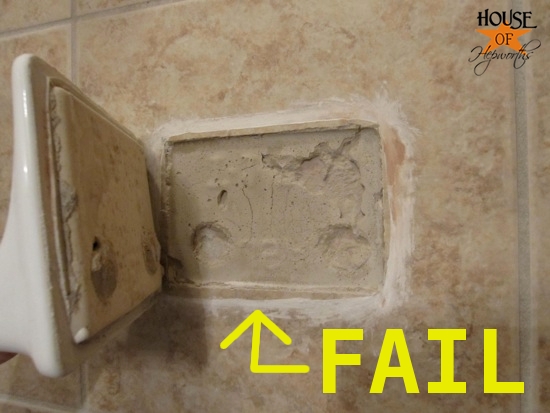 Complete and total FAIL. So, ya, of course it’s glued inside the tile and the tile has a huge hole in it. OF COURSE IT IS.

So now I’ve got two options.

a) cut out the entire tile and replace it. AKA: lots of work (ick!)

b) re-attach soap dish and call it a day.

Uh, ya. I totally chose option B. There’s no way I’m dealing with tiling again. I am still recovering from all the tiling work I did in our old home here and here. The eye twitch is just now starting to go away…

I thought for about 2 seconds and decided that E6000 would be the perfect glue to use inside a shower. Why? I have no idea. It was the closest within reach to me. And I had it on hand. And I’m far too lazy to google and figure out the proper glue to use, then actually go buy said glue. No way, Jose. E6000 all the way, baby. 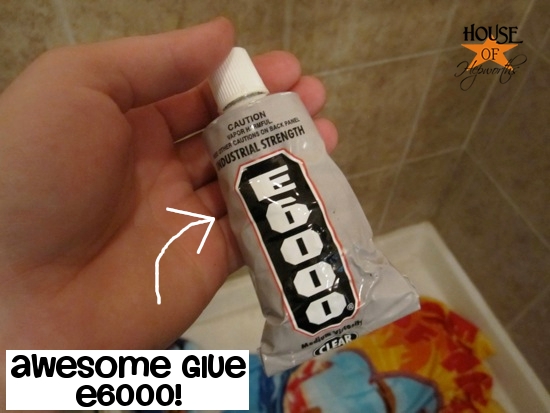 For two days (just to be extra sure it was dry) Ben and I were banished to the guest shower while this complete and total train wreck dried and cured. 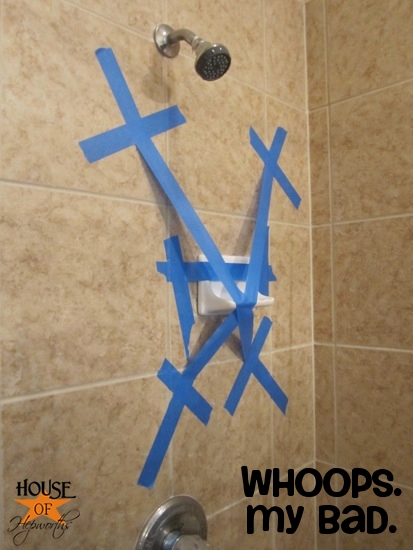 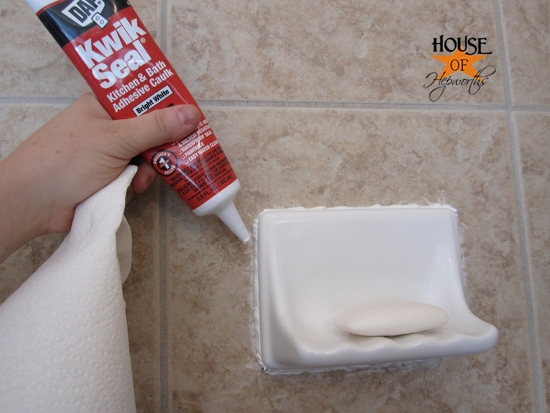 (Don’t worry, I smoothed the caulk out with my finger afterward so it looks nice and clean.) 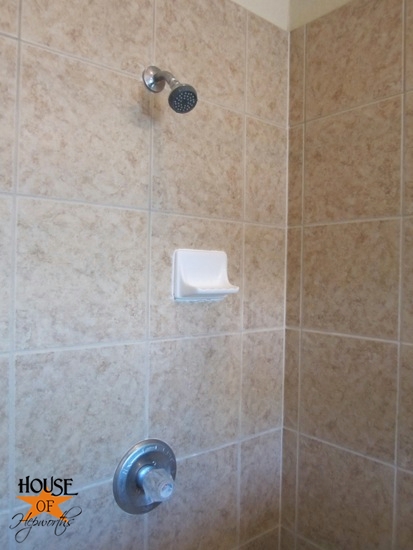 And now for the big reveal! This before and after will BLOW.YOUR.MIND.

Before & After (everyone’s favorite!) 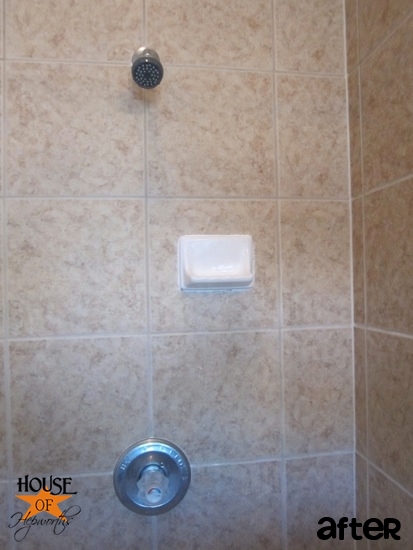 Wasn’t that the best reveal ever?! I knew you’d think so.

Moral of the story: If you screw something up, it’s okay. You can fix it.