I don’t consider myself a goodwill expert by any stretch of the imagination, but I do shop there frequently enough to have learned a few tricks of the trade. Of course, this is all based on my own personal experience with the Goodwills in my area. Your Goodwill may operate a little differently.

If you browse Goodwill frequently you can actually find some pretty great stuff there. You have to be persistent though and hit the store often.

Also, all Goodwills are NOT created equal. Shop all the Goodwills in your area until you learn which ones are better and which ones to avoid. Some have better prices than others, some have better stuff. Some carry more furniture while others tend to have more shoes and clothing. Each Goodwill seems to be it’s own little entity.

You do tend to find better stuff at Goodwills in more expensive areas of town, but not necessarily! A Goodwill employee once told me that just because it’s donated to a specific location does not mean it will hit those shelves. Goodwill likes to mix up their stores and send items all over town. I don’t know if there’s rhyme to their reasoning or if it’s totally random.

Also, this is probably useless information, but Goodwill employees are not allowed to shop at their own store location, even off the clock. This way if they see something awesome they can’t snatch it up before a regular shopper has the opportunity to snag it.

I’ve figured out that there’s one Goodwill near me that purchases all of Target’s “salvage” from them, then re-sells it for pretty cheap.

What is Salvage anyway?

Salvage, at least for Target stuff at Goodwill, is anything that Target deems damaged or unable to sell. Sometimes the item is open or the package is damaged. Most of the time though, it’s all the leftover decor from the previous season that never sold on their own shelves. They have to get rid of it to make way for the new stuff.

I have loads of decor in my home that was purchased at Goodwill as part of Target’s “Salvage” container. I found this lamp and separate shade at Goodwill – brand new “salvage” from Target. I scored the lamp for $10 and the shade for $3! 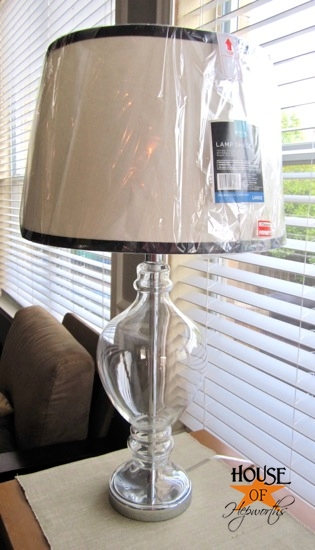 Then, as luck would have it, I found a 2nd lamp at Goodwill the following week! They were out of shades, but in a rare twist of fate I stumbled upon a 2nd matching shade at my local Target on clearance for $6. 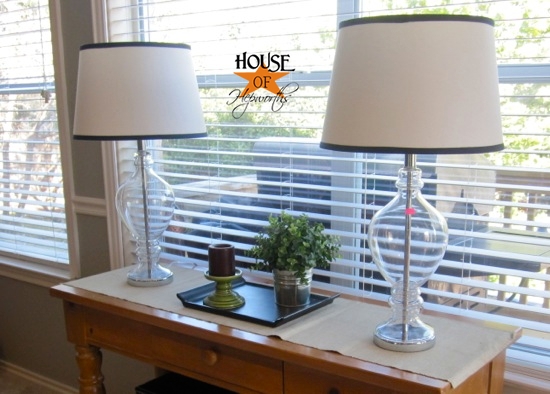 The two matching lamps with shades cost me less than $30 total. For BOTH! And they are BRAND-SPANKIN-NEW!

They have since moved to my bedroom (I’ll show you soon, promise!).

I also was able to grab this large down filled pillow from Goodwill “salvage”. I paid about $3 for it. It was brand-new with the tags still attached. 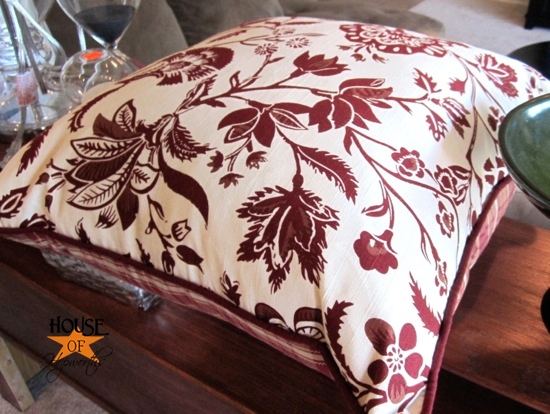 The reason it was deemed salvage is because the stitching had come undone in one spot on the pillow cover. I was able to stitch it up in just a few minutes. It’s now one of our favorites, and certainly most comfortable pillow on our couch. 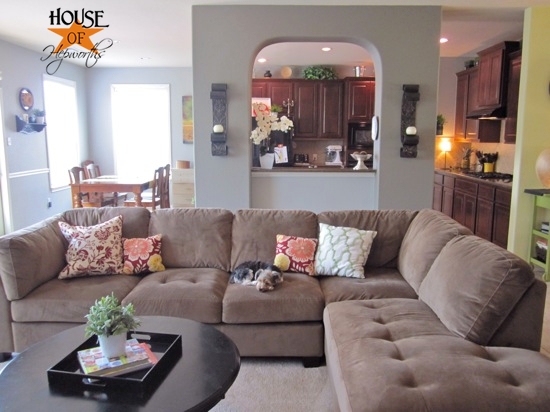 Remember that King-Sized white duvet I found for $10 at Goodwill? 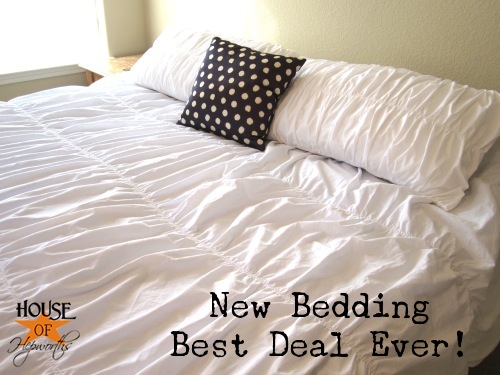 Brand-new with tags from Target salvage. The cardboard sleeve around the packaging was torn so it wasn’t worthy to sit on the shelves at Target anymore.

If you want to know if a Goodwill near you receives Salvage from any stores, call them and ask! And if they say yes, find out which store the salvage is from and also what day the salvage arrives each week. For my store, the Target salvage is stocked on Wednesday morning, so I try to hit up Goodwill Wednesday afternoon or Thursday morning.

Goodwill also has tons of other great stuff that isn’t salvage – it’s just regular ol’ basic stuff people have donated. You have to dig to find the good stuff.

One suggestion I have for you is to put your cash or credit card in your pocket and leave your purse in the car. That way you aren’t fighting with a purse or bag while you are “digging” through the shelves. *edited to add: a commenter pointed out that this might not be the smartest idea. Maybe you should leave your purse at home instead!

Often the items are stuffed to the brim on the shelves. Get in there and move stuff around! Look under platters and boxes. And especially look behind everything! I’ve known of people “hiding” good stuff so they can come back later to get it, so squat down and look behind all the junk on those bottom shelves!

One of my luckiest and most favorite scores at Goodwill are these two Sand Timers. (These are pictured before I windex’d them. They are both perfectly clear now that they are clean.) 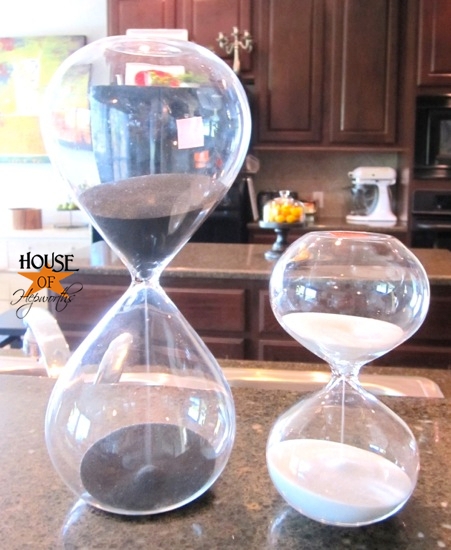 I actually found them together on the same day hidden behind a few large items. They were only $2 each if you can believe it! What makes them an awesome find (besides the price) is that Sand Timers are a popular decorating item right now! Pottery Barn and Ballards think sand timers are hot this season.

My daughter went coo-coo for Cocoa Puffs over this little basket. It is the perfect size Laundry Hamper for her American Girl doll. It rang up at $1. I also found a little rocking chair last week for $1.50. 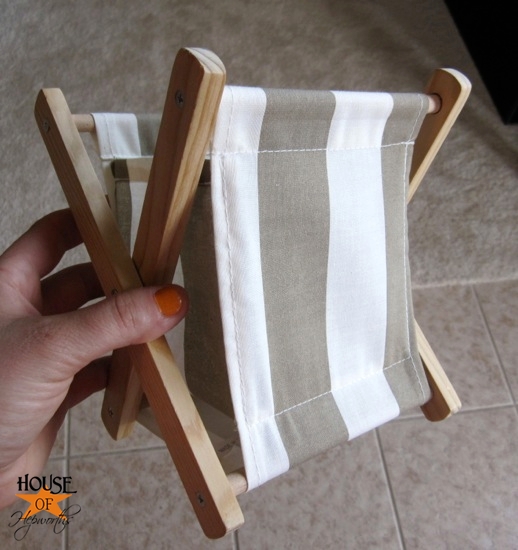 This cute little green dish was only a few bucks and is chip free! I love the color, that’s why I scooped it up. 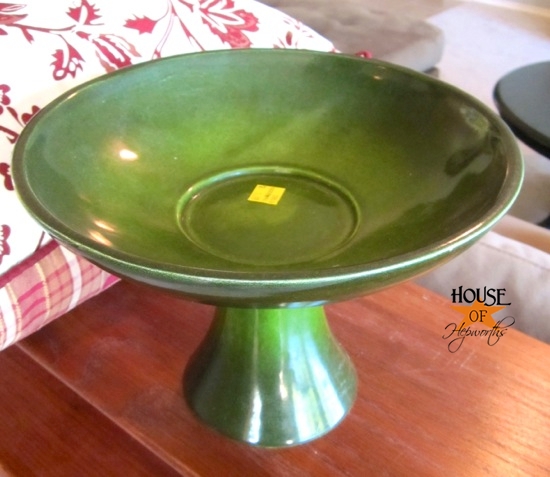 This gross looking dish was a diamond in the rough. I almost didn’t even pick it up because it was nasty! 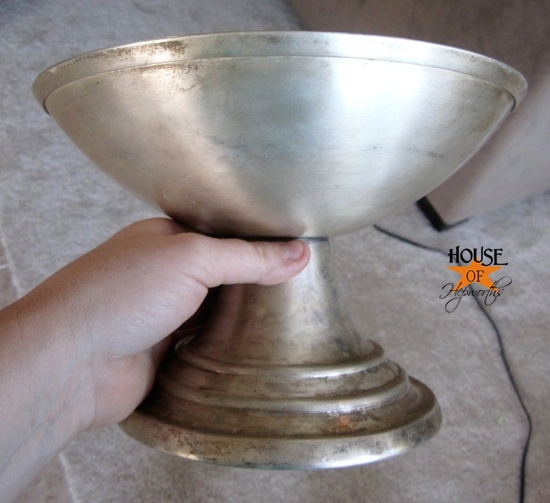 I’m glad I did though! Read what store this dish is from: 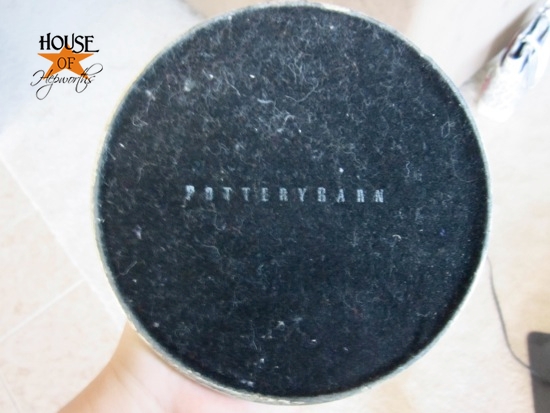 Because of the name (Pottery Barn) I knew it was probably real silver and could be cleaned up pretty easily. I paid $5 for it (more than I usually will pay, but because it’s from Pottery Barn I forked over a few extra bucks), took it home, and gave it a good buffing with some silver cleaner. 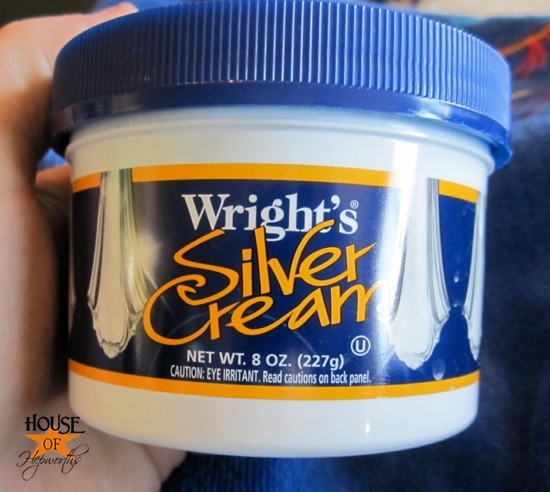 After about 15 minutes of buffing it now looks almost brand spankin’ new. 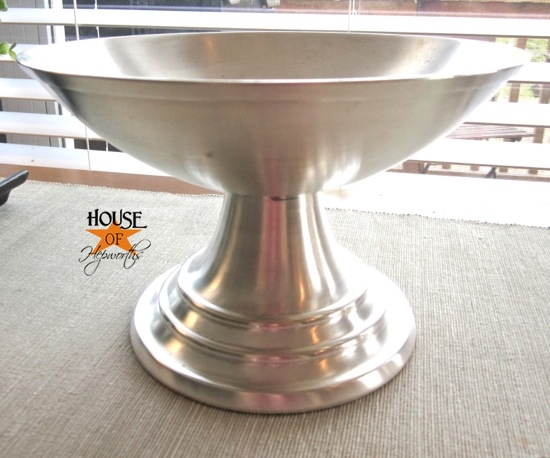 These two spice racks had me almost jumping up and down. The jars are heavy and are glass, and the lids are a thick metal. Plus the stands themselves are weighted and excellent quality. Getting the spices out was a huge chore, but for only $6 for both racks (and all the jars) it was worth the hassle. 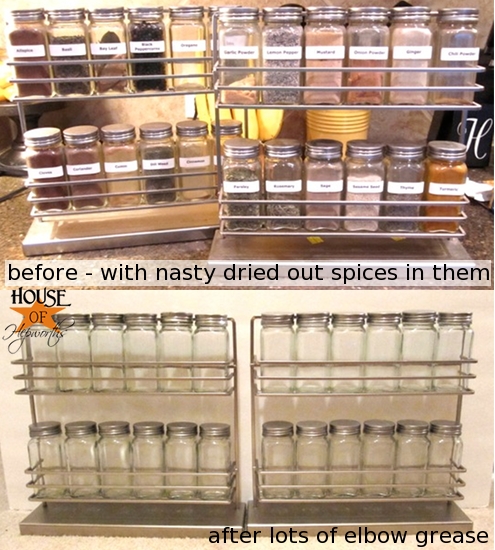 I’ll give you an update soon with pictures, but the spice racks now sit on my desk and house little beads and crafty supplies. You can actually see them behind my Silhouette machine on the desk (under the hutch) in this picture from our office switch post. 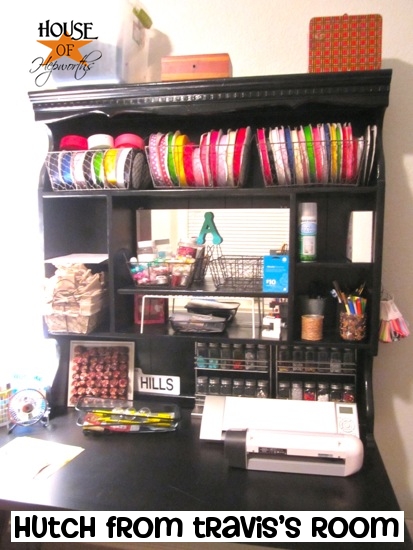 One thing I love about shopping Goodwill is the uniqueness of some of their decor. If you like random quirky stuff, you will probably find a more random selection at Goodwill than at any regular store.

I’m drawn to weird stuff, mainly because I like to be unique and have things that you wouldn’t expect mainstream America to own. They are great conversation pieces and in a world full of trends and popularity, I like to feel like I have my own style.

These either-love-them-or-detest-them Animal Heads are all from Goodwill. I washed them and gave them all a quick coat of spray paint. 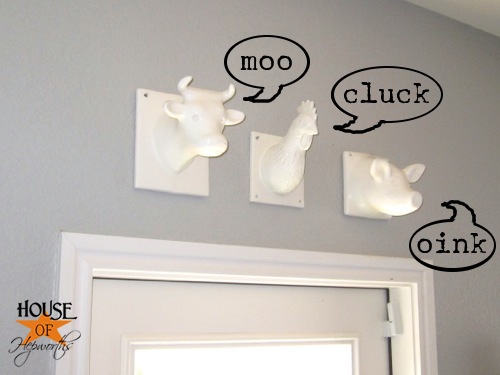 As is this adorable little Buda (perched on top of my FIRE stand I made two years ago – I still adore this simple easy DIY stand). 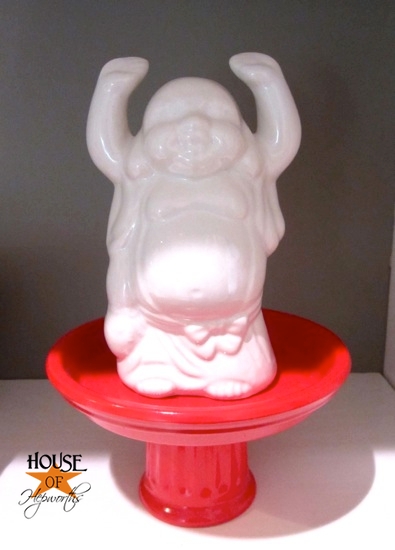 Am I Buddhist? Nope. But this little guy was just too cute not to buy!

You really can’t go wrong with a wine bottle that looks like it got run over by a truck.

I had no idea what I’d use it for, but it was weird and random so I just had to have it. I’ve later learned that people make these and use them as cheese platters. Interesting! I paid $1.50.

This last item is actually not from Goodwill but from a garage sale a neighbor of mine was having. She sold me this cute little Banana dresser for only $7. I was so excited because it looks brand-new. I was even more excited when I saw the same dresser at Target (it’s still there for sale if you want one) for $65! My neighbor could have RETURNED the dresser and received a $65 credit, but instead I was able to snatch it up from her for only $7. What a steal!! 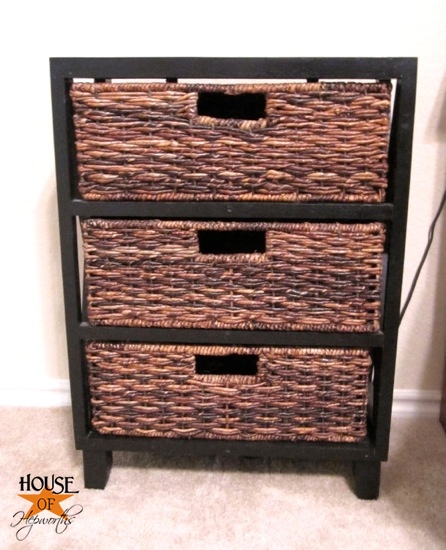 I hope I’ve been able to help give you some good pointers about shopping Goodwill. It really is an experience all on its own.

Oh, one more tip. I’ve never actually done this but my sister SWEARS BY IT. She found a Goodwill Outlet Store. Basically it’s a Goodwill for all the crap that no one wanted at the regular goodwill.

At the Goodwill Outlet they sell stuff by the pound! Isn’t that random? My sister will go down there (with several hours to spare) and will literally spend 3 hours sifting through heaps and heaps of clothes. She always comes home with bags full of almost brand new NAME-BRAND clothing for around 50-65 cents an item.

She’s found Banana Republic, GAP, American Eagle, Aeropostale, Abercrombie, Hollister, etc, some still with the original tags. She brought home a Roxy Quicksilver sheet set a few weeks ago! The only drawback to going to the outlet is that you really have to dig and dig and dig to find the good stuff.

She says the reason there are awesome clothes there is because sometimes the employees at the regular store will overprice something, which causes no one to purchase it. Instead of marking these items down, once an item has sat in a store for a certain amount of time it automatically gets shipped to the Outlet.

One last pointer… I know this is getting really long. Sorry! Some locations will have half-off day. If your location does, go there the night before, just before closing and scout out the store. If there’s something you want to try to score for half-off get there at least 30 minutes before opening the next morning and get in line! Hopefully you’ll get lucky!

So, do you have any tips for shopping Goodwill? What experiences have you had while thrifting at Goodwill? The Good and the Bad! Share ’em all!

PS – I keep forgetting to tell you this! I’m headed to Blissdom and Haven conferences this year. I hope to see you there!